Animal Equality’s vision and mission is a world in which all animals are respected and protected. We focus our efforts on defending animals that are raised and slaughtered for human consumption.
06/04/2020 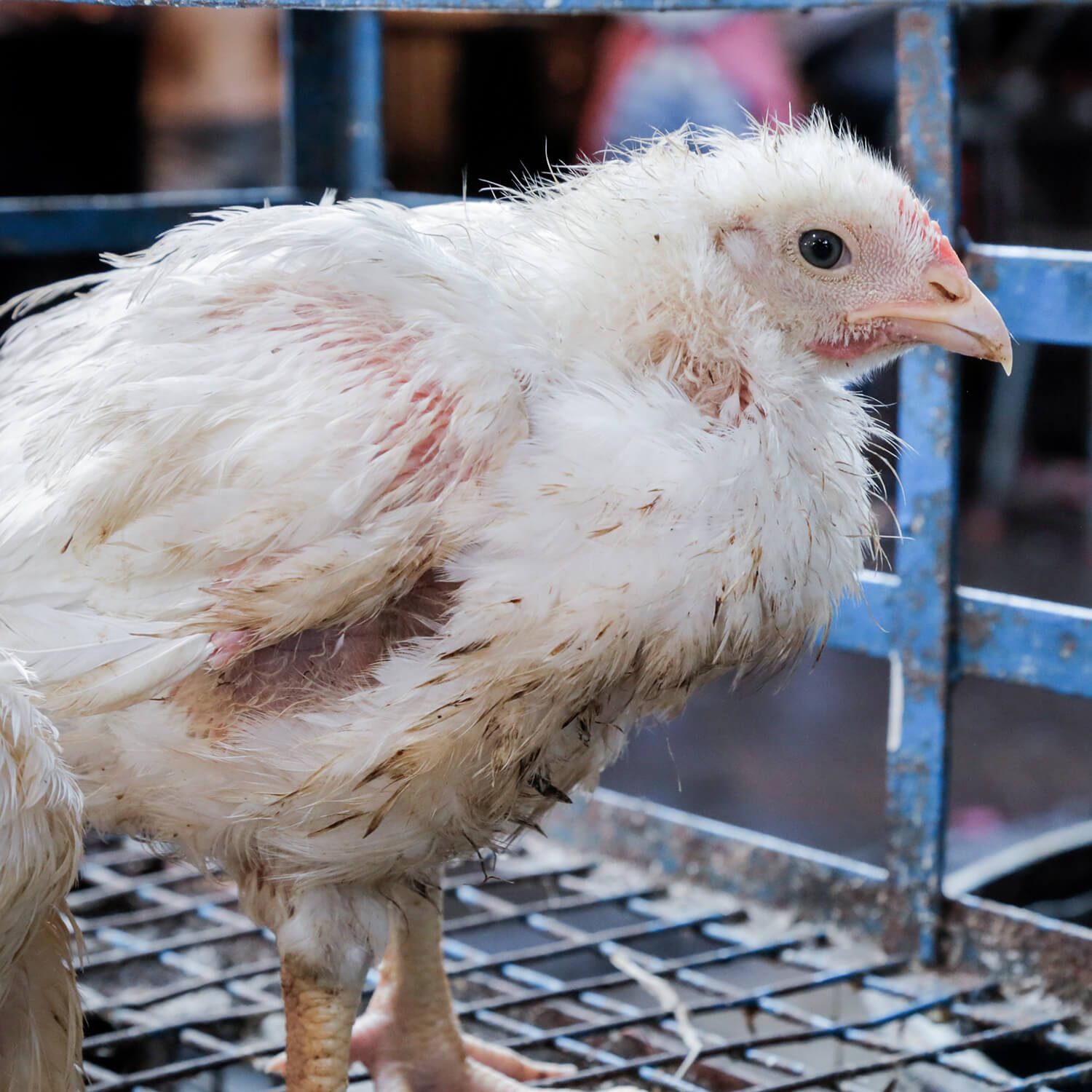 A statement from our Executive Director, Abigail Penny

Animal Equality’s vision and mission is a world in which all animals are respected and protected. We focus our efforts on defending animals that are raised and slaughtered for human consumption, given the enormous scale of the issue and the severity of the lifelong suffering that these animals endure.

Last week we launched an international campaign to urge the United Nations to ban wet markets, which has now reached 100,000 signatures! Thank you to all of those who have already shown their support.

Animal Equality India has been leading on the campaign for some time now, lobbying the Indian Government to ban wet markets prior to the COVID-19 outbreak. All of our international teams have now joined forces to encourage people from every corner of the globe to come together and sign our petition for a worldwide ban.

In these markets, wild and farmed animals are crammed together in cages and are sold and brutally killed on the spot, including crocodiles, goats, frogs, bats, dogs and chickens, to name a few. Our investigators filmed inside wet markets in Vietnam, India and China, revealing bloody scenes and unimaginable animal suffering.

These scenes are horrific and harrowing to watch, and we are grateful to all of those who have viewed the footage and joined our call to action. Yet it must be realised that these scenes bear an uncanny resemblance to those that we have filmed here in Britain too over the course of many years. While the animal species may differ, the reality remains the same: all animals that land on our plates are capable of feeling joy and pain. All animals have one simple wish: to live a life free from harm. Whether a dog or a pig, a chicken or a cat, their suffering is equally as deserving of our attention.

As a leading animal protection organisation we are well known for exposing the truth within the animal agriculture trade through our eye-opening undercover investigations. In the UK we have filmed violent and repeated abuse in British pig farms, systematic neglect of sheep in a Welsh slaughterhouse, severe overcrowding and suffering within UK chicken farms supplying major retailers, calves slapped and separated from their mothers on British organic dairy farms, and more – the list goes on. Devastatingly, c. 60 billion land animals, and trillions of fish, die every year to be eaten by humans. Chickens, fish, cows, pigs, sheep and others are raised and slaughtered for food and the vast majority – around 90% – are forced to live in factory farms, unable to experience natural sunlight or carry out any of their natural behaviours.

We must seize opportunities to defend animals where we can. In light of Brexit, Animal Equality initiated a campaign to ban the importation of foie gras – a cruel ‘delicacy’ made of the swollen and diseased livers of force-fed ducks and geese who suffer immeasurably. Likewise, we must take this chance to ban wet markets once and for all, and get rid of this needless and brutal animal abuse. At the same time we must also reflect on our own eating habits and remain informed of the cruel industries on our own doorsteps. Animal suffering does not happen in one single country or within one continent, but rather across the entire world in varying shapes and practices. Animal agriculture in the UK is incredibly destructive and harmful in its own way.

To learn more about Animal Equality’s investigations and these issues visit: animalequality.org.uk/investigations/

The consumption of animal products is not only harmful to the individual animals involved, but it also poses a serious and imminent threat to public health.

A number of leading scientists have suggested that there may be a link between wet markets and the current COVID-19 outbreak. This virus is affecting every inch of the earth; we are all impacted in some form another and we are all at risk. In light of this, here in the UK we have joined forces with our international colleagues to give added strength to our global campaign to ban these markets entirely. We must act now.

However, it is crucial that we take this moment to consider the health threats posed by British animal agriculture too. Farmed animals in the UK are crammed by the tens of thousands inside dark, dreary sheds, increasing the likelihood of diseases to arise and rapidly spread. This has been proven to be the perfect breeding ground for strains of dangerous viruses and infections that are detrimental to human health – both bird flu and swine flu are thought to have originated from the consumption of chicken and pig.

On the NHS website it states another serious and often overlooked issue that threatens human health: antibiotic use within animal farming. Since infections and illness are rife amongst animals in overcrowded, dirty conditions, antibiotics are frequently overused in the animal agriculture industries. This excessive use is driving up levels of antibiotic resistance and ‘superbugs’ at an unprecedented level, posing an immediate threat to human health.

If we are to reduce the emergence of new animal-borne disease we need to close wet markets across the world. But this alone will not prevent future outbreaks. COVID-19 may be thought to have originated in Asia, but if we don’t change our own habits and industry practices the next pandemic could start right here in the UK.

Reports show that animal populations have declined by more than 50% on average since 1970, so it is alarming to see many endangered wild animals being killed in wet markets, including pangolins – one of the most trafficked animals on our planet. We must close these markets down and begin to protect these innocent animals.

Banning these markets will help, but it will not single-handedly tackle the issue of species extinction. Animal agriculture is a leading driver of mass extinction. As we discovered in our recent investigation of the Amazon rainforest, vast swathes of land are burned and cleared for animal grazing. Mass deforestation is also common in order to grow crops to feed farmed animals in the UK and worldwide, in turn tearing down homes of the wild animals that usually live there. Some of the world’s most loved animals – including elephants, tigers, chimpanzees and penguins – are at risk because of our current farming practices. We are exploiting nature and destroying all life in order to feed animals.

And industrialised fishing is no better. Given the rate at which humans across the world are consuming wild and farmed fish, the vast majority – over 90% – of the world’s oceans are now depleted or underpopulated, struggling to recover from commercial fishing. Entire ecosystems face collapse and the number of dead zones have quadrupled since 1950.

To learn more about these crucial issues visit: animalequality.org.uk/endfactoryfarming/

Banning wet markets globally is the right thing to do – for the sake of the animals, human health and the longevity of our planet. But this is not the end, it’s not even the beginning. There is so much more that we can and must continue to do.

Switching away from animal products and embracing a plant-based diet is the safest option for both humans and animals, and it’s one way you can directly make a difference for us all. Another way to make the world a better place is to sign our petition encouraging the UN to use its power to immediately close all wet markets.

Animal Equality respects all life, both human and non-human animals, and we will not tolerate abuse of any kind. We have a zero-tolerance policy to discriminatory, abusive, derogatory or threatening comments. If we see any offensive comments of this kind on any of our social media pages or otherwise they will be removed with immediate effect.

Our global community is facing a global challenge. Now is the time to reflect, stand together and unite as one. It’s time to end this global threat, once and for all.