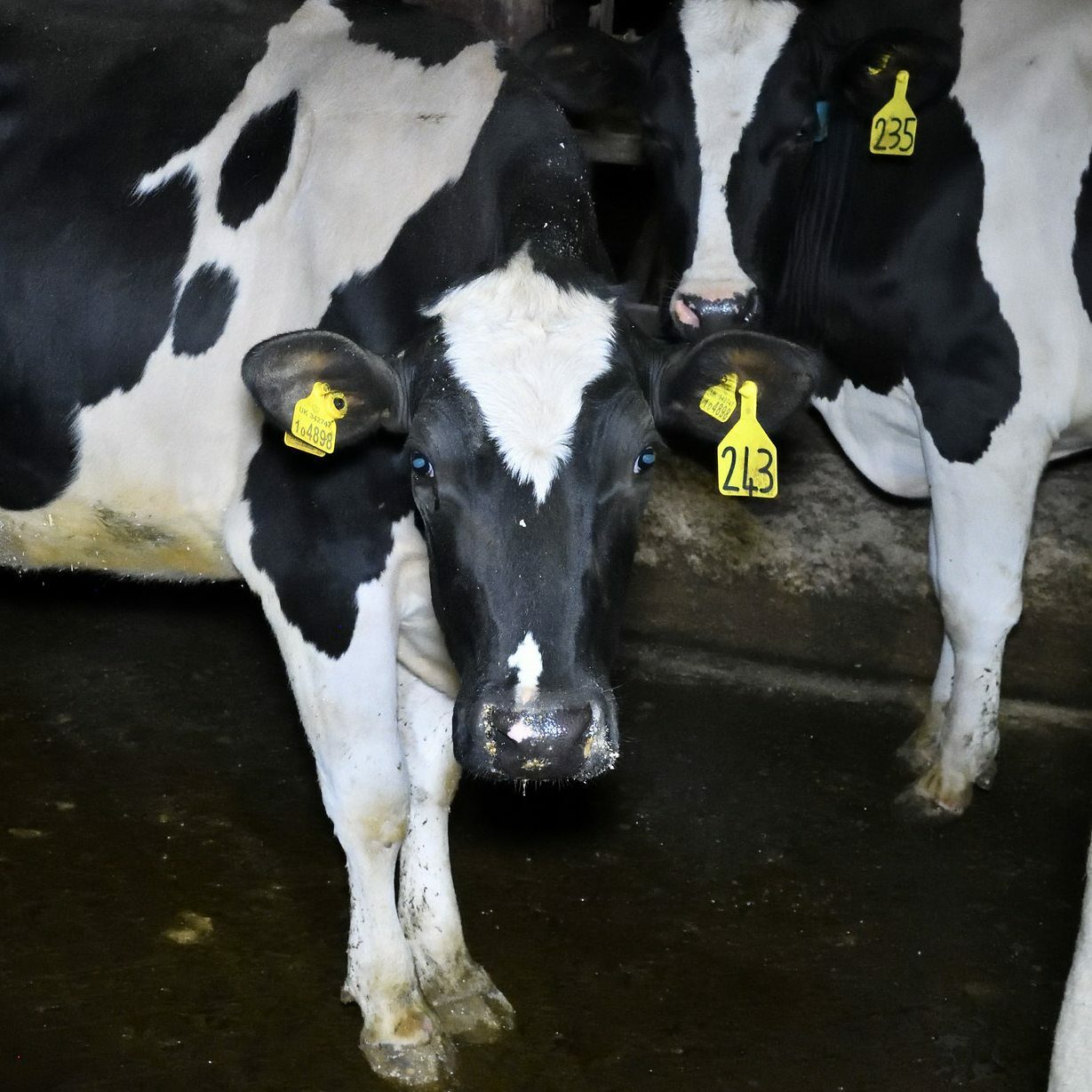 Is There Such A Thing As An ‘Ethical Dairy Farm’?

The UK is the 13th largest dairy producer in the world, producing 15.3 million litres of milk in 2020 and with a market value of £4.4 billion.

However, despite the increase in production, the number of cows used for their dairy today is significantly lower than 30 years ago. The same trend can be seen in the number of farms and dairy producers which  fell from 35,700 in 1995 to 11,900 in 2020.

The result is that today we have fewer cows, fewer producers but more milk. How?

The industry is always looking for new ways to keep costs down and squeeze as much out of these animals as possible. In a constant effort to increase profits, dairy production has been commercialised and industrialised over the years. Two things have happened in the process.

Secondly, the amount of milk demanded from each cow has doubled over the past 50 years, from 4,100 to 8,200 litres. This unnatural milk yield places great strain on their bodies.

Both of these factors have significantly affected the lives of these intelligent animals, who are exploited by the industry for the sake of profit, with little regard for their suffering.

In the UK, 95% of dairy sales in retailers are from large producers, which are becoming more and more intensive.

A growing number of dairy farms are beginning to adopt what are known as ‘zero-grazing’ systems, where cows are confined indoors for their entire lives, taking away those moments where cows used for dairy can express some of their natural behaviours.

The Rise of Mega Farms

Mega farms are industrial-scale factory farms where tens of thousands of animals are kept indoors, crammed into overcrowded barns and unable to express natural behaviours.

Over the past six years, the number of mega-farms in the UK has increased significantly, with now almost 800 operating across England, Wales and Scotland.

According to research from The Bureau of Investigative Journalism the biggest of these mega-farms house more than a million chickens, 20,000 pigs or 2,000 dairy cows.

These farms are often located in the proximity of major food companies.

In Herefordshire, intensively-farmed animals outnumber the human population by 88 to one.

Ethical Dairy: What Does It Mean?

Although the number of mega-farms is increasing, there are still some local, organic farmers who claim to treat animals ‘humanely’ and carry out ‘ethical’ practices, where the animals live a supposedly ‘happy life’ before being sent to slaughter.

But is there such a thing as ethical farming?

Whether animals are kept indoors or outdoors, or whether they are allowed more space compared to intensive farms, they are still exploited for their milk or flesh and are destined to die.

Regardless of the type of farm, the laws currently in place in the UK allow for several shocking practices that have been shown to cause great suffering to animals.

Just like humans, cows used in the dairy industry produce milk, after being pregnant and giving birth, for their babies. To force their bodies to produce milk, they are artificially inseminated or – in some small farms – forced to mate with a bull.

After nine months of pregnancy, she will give birth and start producing milk. Her calf will be taken away from her right after birth or – in the ‘best case’ scenario – after five to six months.

This separation is very distressing for both the mother and the calf, who can keep on calling for each other after separation for long periods of time. Sometimes, mothers chase their babies while they are taken away from them. Footage showing this separation is heartbreaking.

On both intensive and ‘free range’ dairy  farms, instead of being allowed to drink the milk intended for them, calves are fed watery milk substitutes and often kept alone in small stalls for the first two months of life.

While investigating an organic dairy farm in Somerset, our team documented shocking scenes of distressed calves being brutally handled and force-fed. At the time, this farm supplied Waitrose.

After being taken from their mothers, male and female calves are separated.

The females will take the place of their mothers and be repeatedly impregnated to produce milk for human consumption.

These multiple pregnancies and births are extremely hard on a cow’s body, and once she can no longer sustain this cruel cycle – normally when she is between three and six years old – she is sent to slaughter and sold for cheap meat.

Male calves will be bred for meat or sent to slaughter when they are just a few months old and sold for veal.

No matter what conditions they are allowed to live in, these animals are only born to be killed for human consumption.

Over the years, through investigations and consulting various experts, Animal Equality has gathered a pile of evidence indicating that all these innocent animals – like any other living being – clearly want to live.

They are intelligent and social beings who form bonds with their young and with each other. They experience joy, but also fear and pain. The best way to help them is to leave them off your plate.