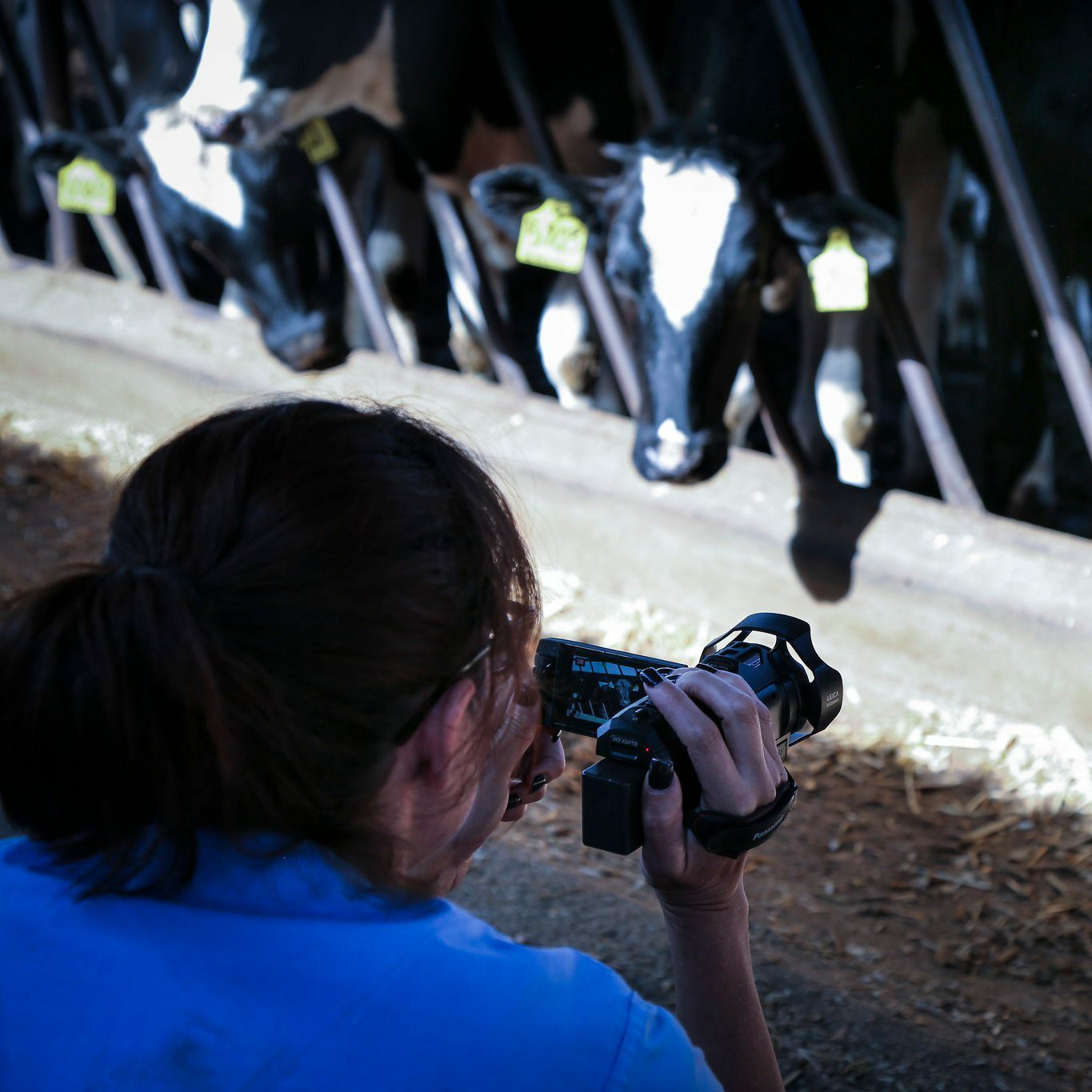 Using Our Voice To Amplify The Voices Of Farmed Animals

Animal Equality has been working tirelessly for over 15 years to defend the most neglected of all: farmed animals.

Our mission is to end the suffering that these innocent beings are forced to endure throughout their entire lives to satisfy a needless demand for their flesh.

Farmed animals die by the thousands every minute. Here in the UK alone, 6.4 billion land and sea animals are killed for human consumption every year.

As an animal protection organisation, we have made it our mission to be the voice of animals who are silenced by the animal agriculture industry. We do so by working with governments and policymakers all around the world to make sure that the existing laws to defend them are enforced, but also to create new, stronger ones.

The most powerful tool we have is the footage we capture through our undercover investigations. By infiltrating factory farms and slaughterhouses we are able to document the abuses that routinely take place and report any breaking of the law to the relevant authorities, demanding that the industry be held accountable.

Over the years we have investigated more than 800 facilities all over the world, finding that – unfortunately – it is never just a bad farm or bad workers, but rather a rotten system that allows laws to systemically be broken and animals to be horribly abused.

In 2018 Animal Equality investigated Poplar Farm in Yorkshire and found pigs suffering with raw open wounds. Some were struggling to stand, some had scars covering their body, some were dead and left out in the open overnight.

Our demand was clear: we wanted the farm to be held accountable for this cruelty. However, after our footage was released, a manager – in an attempt to diminish our reputation – told The Times: “We have no problem. We are a large commercial pig farm and [Animal Equality] is against commercial piggeries, so we expect this sort of trouble from time to time.”

In 2020, we released a first-of-its-kind investigation inside an abattoir operated by The Scottish Salmon Company, bringing to light the cruelty and neglect that farmed fish are subject to. Our footage showed salmon left to die in agony on the bare concrete floor, stunning machines failing to work and fish being slaughtered while fully conscious.

Our findings were so shocking that the investigation prompted official Government welfare inspections to take place for the first time ever inside fish slaughterhouses.

Following the release of the investigation, which was published by The Times,the industry accused us of ‘editing’ the footage – footage from a UK slaughterhouse that speaks for itself and clearly shows fish suffering enormously as a result of a routine disregard for animal welfare.

Animal Equality works to protect animals and to amplify their voices in a world where it is considered ‘normal’ to exploit them and where they are considered objects, whose only purpose is to provide humans with their milk or flesh.

Major media outlets like The Times, the Guardian and The Independent have published our work on multiple occasions to denounce the legal violations that we have found. Press coverage like this raises awareness about the issues related to factory farming, providing an objective and factual point of view.

Our most recent investigation inside a dairy farm was broadcasted on BBC Panorama. During a 30 minute episode, they revealed our findings and interviewed academics, legal experts and representatives of the animal protection movement, as well as figures within the industry itself.

Discover more about our recent investigation

It Is Not Just One Bad Farm

In over 15 years of investigating factory farms and slaughterhouses, we have come to one conclusion: it is never just one bad farm, nor one bad farmer.

However, every time we discover violations of the law that cause severe suffering to animals, we demand that those who commit these crimes are prosecuted for their actions.

As a result of Animal Equality’s investigations in the UK, six farm workers have now been convicted of cruelty to animals.

In 2012, two workers were filmed beating piglets to death with a metal bar on Harling Farm in Norfolk; both men plead guilty to cruelty charges and one was jailed for 18 weeks.

In May 2017, a dairy farm worker in Somerset received a 12 week suspended prison sentence after our investigators filmed him violently abusing newborn calves on a family-run farm.

In 2018, Animal Equality published an investigation inside Fir Tree Pig Farm in Lincolnshire and revealed severe and repeated violent animal abuse by several staff members, including kicking them, jabbing them with pitchforks and slamming gates on their heads. Following the release of the footage, three workers were convicted of cruelty to animals and banned from working with farmed animals again.

And in 2021 Animal Equality released disturbing footage of animal suffering filmed at P&G Sleigh Pig Unit in Aberdeenshire, Scotland. Our investigator filmed shocking scenes of piglets being hammered to death as well as a number of serious legal violations on the farm, which is owned by senior pig industry figure, Philip Sleigh. Following the release of the investigation, which was covered by The Times, the farm owner resigned from his position as Board Member of Quality Meat Scotland and the farm is currently under investigation by the authorities.

Although these are all examples of individual workers who have abused animals, the fact that we so often venture inside a farm or slaughterhouse to find abused and neglected animals is a clear symptom of a whole system that is rotten to the core and allows this to happen.

Unfortunately, most of what we see here is typical of the industry as a whole. These are not isolated incidents.

The Misleading Illusion Of Accreditation Schemes

The animal agriculture industry causes extreme suffering to billions of animals worldwide. And with rising concern among the public about the welfare of farmed animals, accreditation schemes – like Red Tractor here in the UK – are becoming more and more well-known, as they aim to reassure the public that the products they are buying are somewhat ‘better’ than others.

However, the main source of income for most accreditation schemes is the industry itself, as it pays to use their logos.

Red Tractor Assurance – the UK biggest accreditation scheme – is a company owned and funded by the British farming and food industry.

It receives funding from the farms and food businesses that want to use the Red Tractor logo on their products, as well as from meat industry bodies such as the British Poultry Council.

Animal Equality’s investigations have exposed extreme suffering and appalling conditions taking place in accredited farms, including Red Tractor, Quality Meat Scotland and Quality Assured. Had Animal Equality not uncovered these abuses, it is highly possible that these illegalities would have continued unnoticed. With farms hiding behind accreditation logos, the public has no idea that they are being tricked.

In 2017 Animal Equality investigated four Red Tractor pig farms and found several violations of the law, including pigs being confined in sow stalls – metal cages that severely limit the movement of pregnant pigs – a practice which (unlike keeping pigs in farrowing crates, similar cages that are used to confine pigs from just before they give birth until their piglets are around four weeks old) was banned in the UK in 1999.

The owner of Hall Farm – one of the four investigated – replied by shifting the focus to the accreditation scheme:

I’ve been inspected by the bodies and I’ve been given the all-clear from all the relevant bodies and they found nothing wrong.

Red Tractor said in a statement that Hall Farm was suspended “immediately” after the footage was released. However, following an inspection of the farm, the latter was reinstated with the scheme as “no other major issues [were] picked up in the inspection”.

This is just one example of how certification schemes far too often fail to have animals’ interests at heart and can actually contribute to their suffering.

Discover What We Found Inside Red Tractor Farms

Our investigations are the best tool we have to show the inherent cruelty of the animal agriculture industry.

The images we have collected over the years are clear evidence of a whole system where laws are not enforced and accreditation systems often do not have the interests of animals at heart.

At Animal Equality, we will continue fighting to hold the industry accountable for its crimes, with the ultimate mission of closing its doors forever.