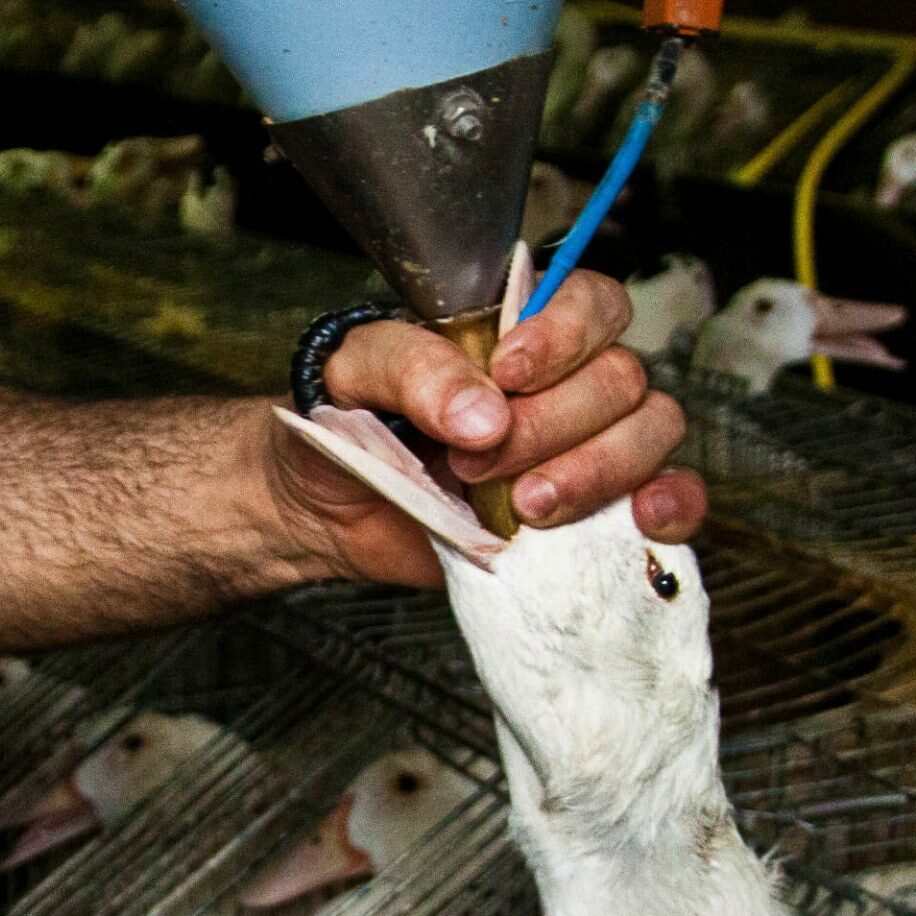 Here are some of the key international successes that Animal Equality has achieved in the fight to end the force-feeding of farmed animals all over the world.

Animal Equality has worked for over a decade to stop the cruel practice of force-feeding birds to produce foie gras. We’ve conducted several investigations on farms, knocked on politicians’ doors, and used grassroots and legal advocacy campaigns to achieve crucial international progress for ducks and geese.

What is Foie Gras?

‘Foie gras’ is a French term that translates to ‘fatty liver’ in English. It is a so-called ‘delicacy’ produced by force-feeding ducks and geese until their livers become swollen to up to ten times their usual size. The process, also known as ‘gavage’, involves pushing a metal tube down the throats of ducks and geese and forcing unnatural amounts of food into their stomachs. This method causes serious suffering to the animals.

Because of its brutality, force-feeding farmed animals has been banned in several countries including the UK, Germany, Italy, Norway, Poland, Turkey, and Israel. In the US it’s been banned in the entire state of California and in New York City.

However, in the countries listed above, it is still legal to import foie gras made by force-feeding from abroad where the production is still allowed. Here in the UK, over 200 tonnes of foie gras is imported every year.

It is time for this hypocrisy to end.

In 2011 and 2012, Animal Equality conducted investigations inside four foie gras farms in France and five in Spain, exposing the cruelty of force-feeding.

Over the years, we’ve collected many hours of video footage and over 500 photographs documenting the shocking reality of life for ducks and geese confined and force-fed for foie gras production.

We’ve used footage and photographs from our investigations to advocate for bans on foie gras production, sale, and import all over Europe, collecting tens of thousands of petition signatures.

Our investigations in France and Spain resulted in disciplinary actions taken against the owner of a foie gras farm, and the owner of the renowned Spanish restaurant Mugaritz.

In 2014, India became the first country to pass a nationwide ban on the sale and import of products made by force-feeding. This historic ban came as a result of Animal Equality’s work and set a precedent for other countries to follow.

The images Animal Equality’s investigators captured inside European foie gras farms were used as part of an extensive report that Animal Equality submitted to the Indian Government in 2013. One year later, the ban was put in place.

Ending Force-feeding in the UK

In the UK, force-feeding birds to produce foie gras is technically illegal on animal welfare grounds. However, shops and restaurants can still import and sell foie gras. The UK imports around 200 tonnes of foie gras into the country each year.

In 2017, Animal Equality launched its campaign to ban foie gras imports into the UK, alongside a petition that to date has been signed by more than a quarter of a million concerned citizens who want to see this cruel product finally banned for good.

Animal Equality’s Directors in other countries backed our request by sending a letter to the UK Government calling for a definitive ban on foie gras imports.

Once put in place, the ban will impact the lives of more than 250,000 ducks and geese every year. We will continue to work tirelessly until the Government delivers on its promise to ban foie gras made by force-feeding.

In a recent vote, the EU Parliament said that “the production of foie gras is based on farming practices that respect animal welfare criteria”, and justified the statement based on the fact that “the fattening phase corresponds to the biological parameters of the animals.” A statement that is in fact, technically wrong.

Ducks and geese living in nature spend a large part of their time foraging for food. Sometimes they forage intensely, sometimes less intensely. This means their food intake varies a lot. The force-feeding process used by the foie gras industry involves pumping up to 450 g of food – about 95% corn and 5% lard – down their throat within the space of three seconds with a 20-30 cm long metal tube directly into their stomach.

Additionally, scientists have found that force-feeding causes severe distress and physical harm to ducks and geese, including respiratory disease and difficulties in walking and standing up.

Many EU member states have already banned the production of foie gras because of the cruelty involved. But those countries are not able to stop foie gras from being sold there.

For example, if the production and sale of foie gras is legalised in France, then all EU countries must also allow this product and may not prohibit or hinder it being imported or sold.

For this reason, Animal Equality has recently launched a campaign to end the production of foie gras in the EU as well.

Banning Foie Gras in The US

In 2019, Animal Equality and other animal protection organisations convinced the city of New York to permanently ban products obtained from force-feeding. After our success in New York City, we’ve recently launched a US-wide campaign to ban force-feeding. We are doing so by going from state to state to introduce legislation prohibiting the sale and production of foie gras all over the US.

How You Can Help

Animal Equality has achieved some important progress for force-fed birds over the years, but the fight is far from over. We will continue to advocate internationally for ducks and geese until no more birds have to suffer from the agony of force-feeding.

You can help these birds by making a donation to support our campaigns and investigators in the UK and around the world.