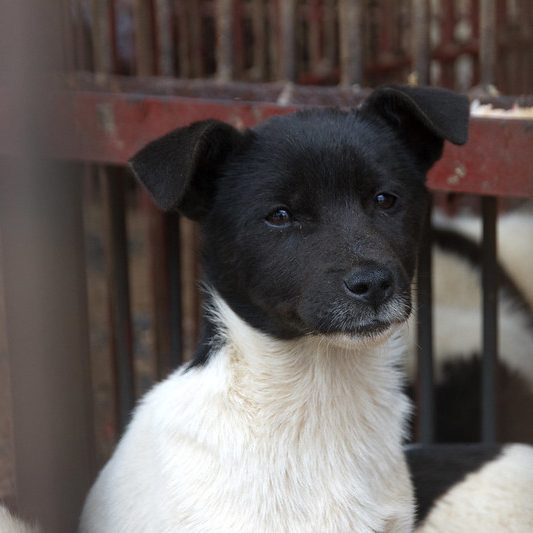 Citing public health and safety, Animal Equality has launched a worldwide campaign and petition calling on the United Nations (UN) to close wet markets across the globe with immediate effect. Not only do these markets pose a severe and imminent danger to humans, they are also abhorrently cruel to animals, who are caged in confined spaces and brutally slaughtered. It’s because of the public health crises these markets are known to cause, as well as the intense suffering inflicted on wild and farmed animals, that we are urging that all wet markets be banned.

Wet markets get their name in part from the blood, guts, scales and water that soak the stalls’ floors, remnants of animals brutally killed for meat. In these markets, wild and farmed animals are mixed together in cramped, unsanitary cages, creating the perfect breeding ground for zoonotic diseases. In exclusive footage shot by Animal Equality at wet markets in China, Vietnam and India, animals such as deer, chickens, frogs, crocodiles, and dogs are shown living in filthy conditions and suffering from dehydration, starvation and disease. It is in these unregulated markets that diseases like SARS originated, and where scientists believe COVID-19 began.

While scientists are yet to determine the definite origin of the COVID-19 outbreak, researchers speculate that the virus began in a seafood market in Wuhan, China – notorious for also trading in wild animals. This wouldn’t be the first time that a deadly virus was linked to animal trade and consumption: H1N1 Flu (Swine Flu) and Middle East Respiratory Syndrome (MERS) are two other recent examples of viruses that likely originated in animals and then jumped to humans causing dangerous outbreaks.

Wet markets represent a direct threat to animals and present a major public health risk. For animals, the prospect of abuse and suffering on factory farms has been well-documented. For people, the issue arises when consumers are exposed to animals – both dead and alive – at these unhygienic markets, as it increases the likelihood that animal-borne diseases will make the leap to humans.

Recently, China temporarily banned the buying, selling, and eating of wild animals in an emergency effort to prevent infectious diseases from spreading from animals to people. This measure was in direct response to the recent COVID-19 outbreak, as more and more experts suspect the pandemic was caused by the illegal trade and consumption of wild animals. However, a temporary ban does not go far enough; this needs to be made permanent and more must be done. For the health and safety of both animals and people, wet markets must be shut down globally for good.

“The animals have been transported over large distances and are crammed together into cages. They are stressed and immunosuppressed and excreting whatever pathogens they have in them. With people in large numbers in the market and in intimate contact with the body fluids of these animals, you have an ideal mixing bowl for [disease] emergence.”

“If you take wild animals and you put them into a market with domestic animals or other animals, where there’s an opportunity for a virus to jump species, you are creating … a superhighway for viruses to go from the wild into people. We can’t do this anymore. We can’t tolerate this anymore. I want the wild animal markets closed.”

What can you do?

As scientific research and our investigations have shown, animals killed for food suffer immensely every single day in intensive farms within the UK and beyond. This needless animal suffering can also, at times, create strains of dangerous viruses and infections that were previously unknown. Not only is consuming animal products a detriment to human health and safety, it’s also a leading cause of climate change. Switching away from animal products and embracing a plant-based diet is the safest option for both humans and animals, and it’s one way you can directly make a difference for us all. Another way to make the world a better place is to sign our petition encouraging the UN to use its power to immediately close all wet markets. It’s time to end this global threat, once and for all.