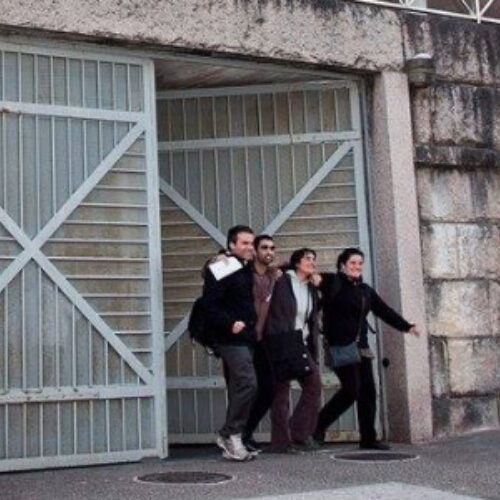 11 Years After I Was Arrested: A Testimony From Animal Equality’s President

Giovanna Lastrucci Digital Marketing Manager
12/07/2022
It has been 11 years since Animal Equality's President, Sharon Núñez, was arrested for filming inside farms. Since then she has never stopped fighting for farmed animals and has built a global organisation fuelled by professional activists with a common mission: to create a better world for animals.

It’s been over a decade since Sharon Núñez, Animal Equality’s President and Co-Founder, was arrested for filming inside a pig farm in Northern Spain.

Read this first-hand account of what she experienced and her long-standing commitment to animals.

I was sitting in a dark cell in the north of Spain. Fireworks went off a few miles away.

The cell only had three things: a toilet, a mattress, and a sink to drink from. I could feel the guards watching me through the cameras on the walls.

I remember the summer of 2011 vividly.

I was arrested for using a camera to film the filth and pain inside factory farms.

Outside, people celebrated ‘San Juan’, the start of the summer season. Inside, I was counting how many years I could spend in prison.

Despite the high temperatures outside, the cell was damp and cold.

I spent five days in that cell, wondering:

What would happen to me next?

What would happen to the ten people I was arrested with?

What would happen to the animals?

It all began in 2006 when Animal Equality was founded. Jose Valle, Javier Moreno, and I knew we needed to show what was happening to animals on factory farms. Few believed that the conditions inside factory farms that we described during our protests were real.

So, we decided to take a camera and show them the truth.

We spent years investigating farms and slaughterhouses: five slaughterhouses, 172 pig farms, and dozens of chicken and hen farms. On those farms, I met the pigs, hens, chickens, lambs, and cows I had pledged to defend the day I became an activist. I even managed to rescue some of them.

With tears in my eyes, I filmed bleeding basketball-sized tumours on pigs. I filmed hens who had become featherless due to the stress and constant friction of their wings against wire cages. I filmed chickens in such agony that they had given up on life. They lay on their backs, gasping for air in a shed full of their own excrement.

It was all happening right in front of me.

The media journalists in Spain were shocked by the images. They aired the footage of our investigations in major publications and on prime-time television, and it made the main pages of many newspapers. I was interviewed by TV and radio press. Millions sat in front of their TV screens, seeing the inside of a factory farm for the first time.

They began to believe that farmed animals deserved respect.

And the animal agriculture industry was furious.

They started following me, my friends, and other advocates. They attended our protests and filmed us. They insulted us in the media. They also involved a judge and the police in investigating our work. My private phone conversations were tapped for years. And they even went after my family.

The police finally arrested me and ten others on 11th June 2011. I was pulled over by the police and arrested on my way to film inside a slaughterhouse.

As I was being driven to jail, I held another activist’s hand and realised our work’s effect and the lengths they were willing to go to stop us.

The industry wanted to put an end to investigations. And they tried to hide the truth from you about what they do to animals.

But they failed. Advocates worldwide erupted in protest, calling for our immediate release.

Our case was finally closed years later. Another judge realised that the case against me and other activists was baseless and that what we were doing was not illegal.

And rather than deterring me, this made me stronger. I walked out of jail promising animals that I would do it all again for them and fight until the very end.

And I have kept my promise.

Since my arrest in 2011, Animal Equality has become an unstoppable global force. We’re working in eight countries and have released investigations that have appeared in The New York Times, CNN, The Sunday Times, El País, and The Guardian.

We’ve visited over 800 facilities that confine and hurt animals and have released over 150 investigations internationally. The footage Animal Equality has filmed helped ban the importation of foie gras in India. It’s helped ban the cruellest practices in farms and slaughterhouses in Mexico. And it’s encouraged hundreds of companies to adopt meaningful policies that significantly reduce the suffering of animals. It’s also inspired millions of people to choose plant-based options and spare animals from needless suffering.

But our work isn’t done yet. Powerful industries continue to abuse and kill animals, try to silence advocates, and stop investigations. In the US, for example, there are now states where documenting animal abuse carries a harsher sentence than abusing the animal, and we face similar threats in many other countries we’re working in.

The cold of that cell and the feeling that the industry would do anything to stop me are still very present for me.

But so is my determination to help animals, whatever the cost. I know that the thousands of people supporting us from around the world share that same spirit.

Today, I share one of my most difficult moments because animals still need us. They need people like you to fight for their stories to be told.

Since its foundation, Animal Equality has been committed to doing whatever it takes to expose the powerful animal agriculture industry that continues to abuse and kill animals, tries to silence advocates and attempts to prevent investigations.

Sharon is just one example of the many extraordinary people working behind the scenes to achieve meaningful and lasting change for animals.

Last year marked the 15th anniversary of Animal Equality. Executive Directors from all eight countries where we operate spoke about their work and experiences as activists.

Watch the video and learn more about our history and achievements over the last 15 years.