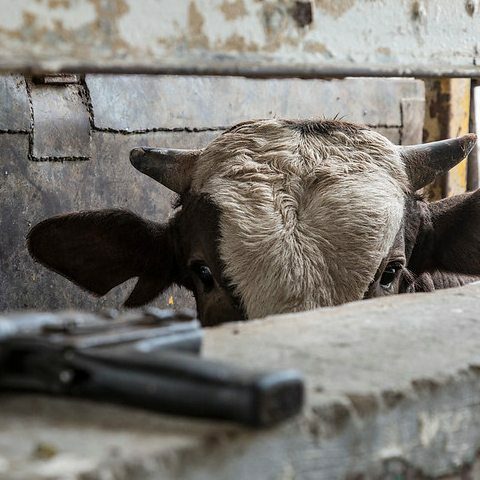 What Is It Like To Work In A Slaughterhouse?

The shocking testimonies of undercover investigators and former slaughterhouse workers.

One of the questions Animal Equality and our investigators are often asked is: what is it like to work in a slaughterhouse?

Providing an answer to this question is not easy, as there is no one answer that applies to everyone. Those who find themselves inside slaughterhouses experience and process the terrible cruelty they are faced with in very different ways.

That’s why we thought it was best to let those who have been inside these places answer themselves.

We hope that these testimonies will open your eyes even further about what happens inside slaughterhouses to both animals and people.

Working in a Slaughterhouse: The Testimony of Sean Thomas, International Director of Investigations at Animal Equality

Before joining Animal Equality, Sean Thomas worked as an undercover investigator for over 20 years, investigating several factory farms across the world with one goal: to document what really happens to animals behind those closed doors.

In this interview, Sean talks about what he has witnessed inside slaughterhouses and farms around the world and what it’s like to work in a slaughterhouse.

Watch the full interview below.

As explained by Sean, slaughterhouses operate like assembly lines with the aim to kill as many animals in as short a time as possible. This means that all too often the animals are killed with a complete disregard for their suffering and for animal welfare standards.

Workers are expected to embrace that animals are numbers and it is part of a production cycle, and farms must maximise that production cycle. And so the consideration for any individual animal can never be given within that system.

Working in Farms and Slaughterhouse: The Testimony of an Undercover Investigator

Investigators are the silent heroes in our mission to protect animals. They rarely speak publicly because, due to the nature of their work, they usually have to remain anonymous.

But in a new video recorded and published by VICE, an undercover investigator speaks about their experience inside almost a thousand farms in the UK and abroad.

It’s a rare and powerful insight into the lives of the heroes that Animal Equality depends on in order to help animals.

The investigator – who wears a mask to protect his identity – talks about a number of sides of the job, including what factory farms are like to experience in person, what big agricultural companies fear, so-called ‘free-range’ and organic farms, and the complex mix of emotions he feels as an investigator.

Watch the full interview below.

In January 2020, BBC News published an interview with a former slaughterhouse worker in England, who wanted to talk about her experience and the effect that working in a slaughterhouse had on her mental health.

This powerful testimony proves once again what our undercover investigators have documented time and again: ineffective stunning, the slaughter of pregnant cows and newborn calves, and appalling hygiene conditions.

Violence and suffering are always present inside slaughterhouses. The cries of the animals and their pain fill the room, therefore often the only way not to be overwhelmed – as she explains – is to dissociate.

One skill that you master while working at an abattoir is disassociation. You learn to become numb to death and to suffering. Instead of thinking about cows as entire beings, you separate them into their saleable, edible body parts. It doesn’t just make the job easier – it’s necessary for survival.

However, dissociation may not work for everyone, so – as explained in this testimony – others turn to alcohol and drugs.

The former abattoir employee told the BBC that after several years of working at the slaughterhouse she started to have suicidal thoughts and that’s when she knew it was time to leave the job. And so she did.

Others are so severely impacted by the trauma and do not receive the mental health support that they so desperately need, that their story ends differently -as was tragically the case with one of her colleagues who she worked with in a facility skinning carcasses.

Although she no longer works in a slaughterhouse, the time spent there is impossible to forget and haunts her at night.

And at night, when I close my eyes and try to sleep, I still sometimes see hundreds of pairs of eyeballs staring back at me.

Often, after years of working inside slaughterhouses, employees quit their jobs because they can understandably no longer cope with what they have been forced to witness.

This is the case of Mauricio Garcia Pereira, who worked for seven years at the Limoges public slaughterhouse, the largest in France.

After years of witnessing horrific cruelty, together with the French animal rights organisation L214, Mauricio Garcia Pereira exposed the horrific reality of the slaughterhouse he was working at.

But he did not stop there and he wrote and published a book to tell his experience and expose what goes on behind the closed doors of slaughterhouses.

During the interview, Mauricio talked about the many issues involved in working in the slaughterhouse. First of all the terrible suffering of the animals who, according to Mauricio’s testimony, are aware of the fate that awaits them from the moment they are unloaded from the trucks.

Mauricio also talked about how, because of the brutal and traumatic experience, people working inside slaughterhouses sometimes turn to alcohol and drugs to help forget what is happening. He himself admitted to taking drugs while working at the slaughterhouse to cope with the pain he witnessed on a daily basis.

This is further proof of the immense suffering that this industry causes to both animals and people.