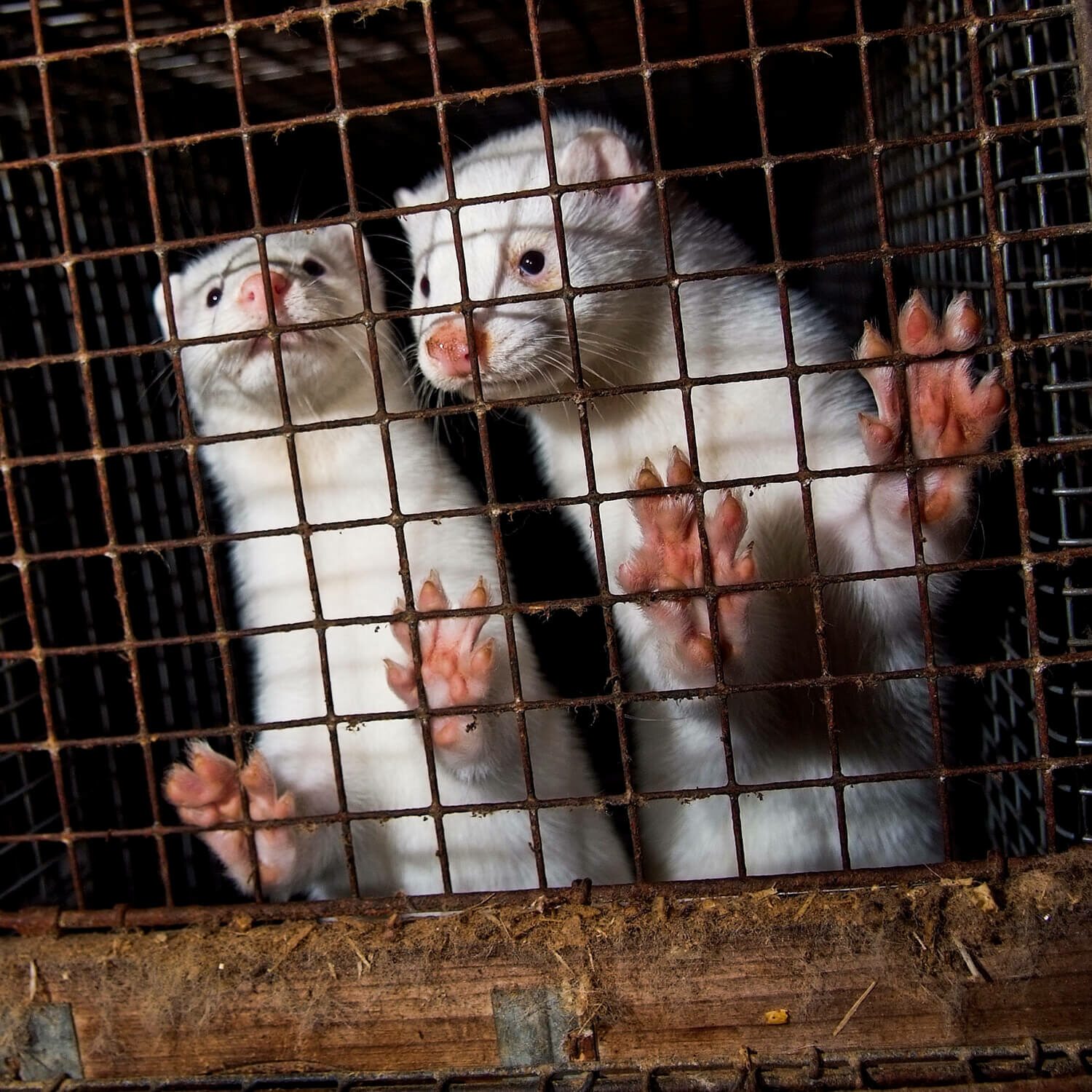 Millions of Minks Culled Due to COVID-19 Risk

The COVID-19 virus has mutated in minks farmed for their fur in Denmark, while in other European countries thousands of chickens have been slaughtered due to avian flu and new cases of swine fever are emerging in wild boar populations leading to fears that it will reach commercial pig farms. What more evidence do we need to understand that the way we exploit animals is a danger to our health?

On November 5th 2020, after 12 people in Denmark became infected with a new mutation of COVID-19, the Prime Minister of Denmark, Mette Frederikse, announced that all of the approximately 17 million minks bred for fur in the country should be killed. According to ongoing research the virus is mutating in minks, and this brings about the possibility of a new strain emerging which vaccines currently under development would not be effective against.

Around 2.8 million minks in Denmark have tragically already been slaughtered. What’s more, this mass culling won’t solve the problem worldwide. On the contrary: minks on fur farms in five other countries – Italy, the Netherlands, Spain, Sweden and the United States – have also tested positive for COVID-19.

Once again, animals are paying the highest price because of one of the most serious human errors in history: treating living, feeling beings as nothing more than products.

Why have minks been infected?

Minks seem to be particularly susceptible to COVID-19. In addition the way they are bred for their fur, like all intensive animal farming, involves thousands of animals kept together in confined spaces which increases the likelihood of infection. It seems that the virus was passed from humans – such as farm workers or breeders – to the animals, and then underwent a mutation in minks.

Is this anything to be surprised about? Not really. Farming animals, whether for fur production or their flesh, has always represented a risk to public health.

According to experts, the animal agriculture industry is a major epidemiological risk factor. Particularly dangerous in this regard are intensive factory farms, where the vast majority of animals bred for consumption are confined.

Due to overcrowding and the low genetic diversity of the animals, intensive farms make for the rapid spread of viruses. The unnatural conditions also cause chronic stress for animals, consequently weakening their immune systems and making them more vulnerable to contracting diseases.

This public health risk occurs more regularly than you might imagine. A highly infectious strain of avian influenza has been spreading across Europe, with cases reported in Germany, the Netherlands, France, Northern Ireland and Great Britain. The UK Government has confirmed that birds are being killed in several affected areas across England as a result of cases being detected on chicken farms.

And in Germany, efforts to counter the spread of African Swine Fever in wild boar have been ongoing for weeks. There are fears that the virus, which currently does not affect humans, could reach pigs on commercial farms. This would have devastating effects for those animals infected and likely also lead to large-scale culling. The same alarm has also been triggered in other European countries, including Italy.

These examples are only the tip of the iceberg: a staggering three-quarters of new or emerging diseases in humans come from animals.

Too great a risk

“The risk is too great” were the words used by the Danish Prime Minister regarding her decision to advise 17 million minks be slaughtered. The risk of continuing to breed, farm and exploit animals is indeed too great, but why are we only just starting to realise this when a major pandemic is already running its course?

How many other species does this virus need to mutate in before humanity understands how risky animal agriculture is and takes drastic action? And what percentage of risk are we willing to tolerate when our survival is at stake?

Billions of animals are raised for human use every single year. All it would take is for COVID-19 to mutate once a year in one population of one species to possibly prolong this nightmare we are experiencing indefinitely.

We hoped that after the outbreak of this pandemic it would be clearer that the health of animals, the health of the planet and the health of humans are closely linked, but animal farming has not stopped. At Animal Equality, we will not stop. We’ll continue to work with Governments and institutions to ensure that positive changes are made for animals.

All of us have the power to help by making small changes to our everyday life too. We have the opportunity to choose what to eat, what to put in our shopping trolley, and which industries to finance. By making conscious, compassionate choices we can all choose to build a better future for animals, the planet and future generations.

There’s never been a better time to try plant-based. Get started today!