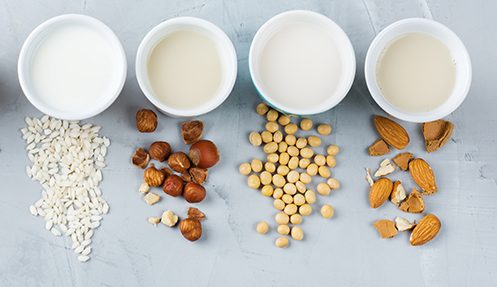 5 Alternatives to Milk Which Are Better than Dairy

Sally Ivens Communications Manager
05/05/2015
Dairy is so outdated... With an abundance of options, there's no excuse to at least try dairy-free milks. They're so delicious we're pretty sure you'll be hooked to AT LEAST one!

If you haven’t already, check out our previous article concerning 3 Ridiculous Myths About Milk to be aware of what the dairy industry is hiding from you. The solution to ditching dairy is to replace it with healthier and more compassionate milks which don’t harm animals. It’s a win-win.

No, you don’t milk an almond the same way you milk a cow. The process involved in dairy milk is pretty gross so thank gosh for almond milk cause it’s damn right delicious. It’s creamy texture and mild nutty taste will definitely win you over. It’s got no cholesterol or lactose and can be found in a variety of tastes.

The most common types are plain, vanilla-flavoured and chocolate-flavoured. There is also versions such as reduced sugar, coconut flavoured and iced cappuccino…. Are you convinced yet? No? Okay… Bonus point: it’s sometimes even enriched with extra vitamins. It’s an extra, considering almonds are already rich in fibre, calcium and iron.  Give it a try, seriously.
2. Oat milk

We recently had a vegan food giveaway in London and someone approached the table asking what milk we were handing out as a tester. One of our volunteers replied “oat milk”, to which the enquirer asked “goat milk?” No, definitely NOT goat milk! Goat milk is for goats. This is way better. It’s oat milk.

Oats have a high protein and fiber content and are said to enhance the immune system which is a huge plus. It’s also easy to find in most shops. Some brands even fortify their products. We personally love Oatly. After recently trying it we were hooked. Go for the chocolate one if you’re into choccie and you won’t look back. Delicious on it’s own or added into recipes, we’re pretty sure this will be end up repeatedly in your fridge.
3. Rice milk

It may sound daunting at first, or you may never have heard of it before, but rice milk is actually really good. Like almond milk, it is available in different formats. It can be both sweetened and unsweetened, making it extremely versatile. Cholesterol and lactose free, along with it’s subtle taste, make this milk quite a hit in the supermarket. It’s also available in vanilla, chocolate and… almond flavour too! A great alternative to traditional cow’s milk even if it’s less popular than it’s sister milks.

It’s availability is quite widespread and it also comes in varying versions such as chocolate, vanilla and strawberry flavoured and also mixed with almond milk and other nuts which results in a highly nutritious but also delicious combination. Can be used to substitute in most, if not all, recipes which call for cow’s milk. BTW: Coconuts are actually a fruit not a nut!

It’s distinctively ‘hazelnutty’ flavour really makes this one stand out from the crowd. It is naturally low in saturated fats and, of course, lactose-free and vegan.

It is increasing in popularity but it can be a little bit harder to find than the other plant-based milks as most people tend to go for almond milk, among others. It’s still great as a drink on its own or in coffee, tea or mixed with hot chocolate. Due to the aforementioned taste, some may deem it less suitable for savoury dishes. It can also be found with enriched vitamin B12 and calcium so it’s got a good nutritional import.

Give them a go and replace dairy with better, more sustainable, healthier and animal-friendly milks which are actually quite delicious. The more demand we create, the more offer there will be, resulting in a shift which will undoubtedly benefit animals.