SIGN OUR PETITION URGING TESCO TO DO BETTER FOR CHICKENS

Every year millions of chickens are forced to endure immense suffering on farms operated my known Tesco suppliers. The breeds of chickens raised on these farms grow so unnaturally big and fast that their organs and legs simply cannot cope with the strain of their enormous bodies. This results in birds dying from heart attacks, while others become unable to walk and suffer a slow, painful death due to dehydration or starvation.

In late 2019 Animal Equality investigators captured shocking footage on four British Moy Park farms based in Lincolnshire and Nottinghamshire; all four farms are Red Tractor-certified and appear to have been audited by Integra Food Secure – a third party auditor contracted by Tesco at the time. The harrowing scenes show a significant number of small chicks who had their necks crushed and suffered agonising deaths at just a few days old, simply because they were too weak or were deemed too small to be profitable.

The chickens on these farms are packed into sheds of 30,000 birds or more. Each bird has as little space as an A4 piece of paper; they barely have room to move around. Many struggle to spread their wings or carry out other natural behaviours such as perching and dust bathing.

Do these practices really align with Tesco’s values?

Your competitors - Waitrose and M&S - as well as a number of large multinational corporations such as KFC, Nestlé and Unilever have all responded to consumer demand for issues like these to be phased out by signing up to the Better Chicken Commitment. You too have the rare opportunity to significantly reduce the suffering of millions of animals every single year. I urge you to realise the severity of this issue and join these companies in signing Tesco up to the Better Chicken Commitment as a matter of urgency.

Your request will be shared with Tesco, making it clear that some of the worst abuses in its chicken supply chain must end.

Your actions are making the world a better place for animals.

The Torment of Chickens

Millions of chickens are raised on factory farms associated with Tesco each year. These birds endure immense suffering throughout their short lives, yet Tesco continues to shy away from addressing the worst abuses that these animals are forced to go through. Meanwhile, the likes of Waitrose, M&S, KFC, Nando's, Nestlé and Unilever have all committed to meaningful chicken welfare policies, putting Tesco to shame. Below are some of the shocking findings uncovered in Animal Equality’s recent investigation into farms operated by Moy Park – a known Tesco supplier. 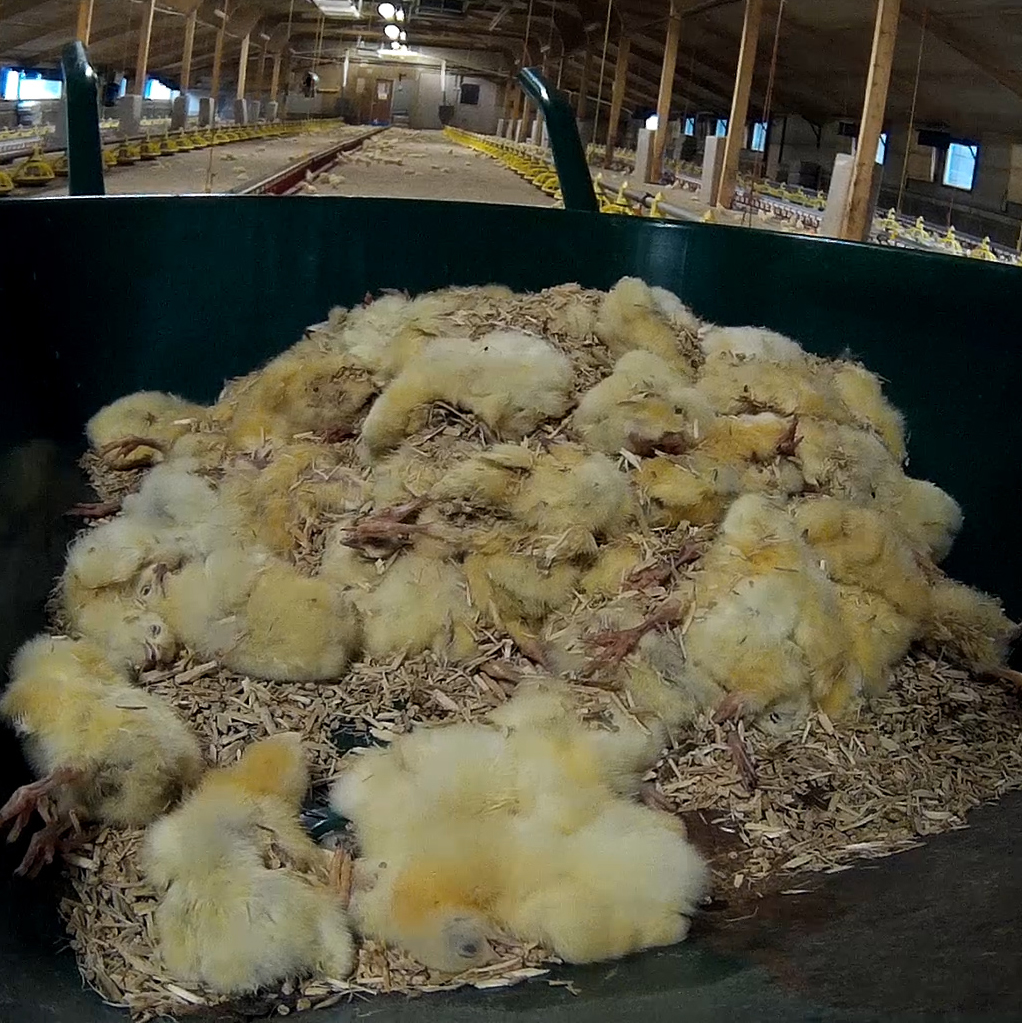 Within multiple farms operated by a Tesco chicken supplier we discovered hundreds of baby chicks - deemed too small or too weak by farm workers - to be callously killed each week. They might not grow to be quite as big as their flockmates, so it’s considered more profitable to break their necks than provide them with food and water. Workers were seen using unusual methods to do this, such as by crushing the birds' necks on a bucket or a wellington boot. To make matters worse, this appears to be done ineffectively in some cases, causing chicks to writhe around for minutes after their necks have been painfully broken. Distressingly, these deaths weren't just anomolies. In one shed, a staggering 500 birds died in just one day.

The birds that escape having their necks' crushed sadly don’t have a much better outcome. The breeds of chicken raised on farms linked to Tesco grow so unnaturally big and fast that they suffer from a series of serious health issues. Their enormous bodies put so much strain on their organs and legs that some die of heart attacks, while others become unable to walk. 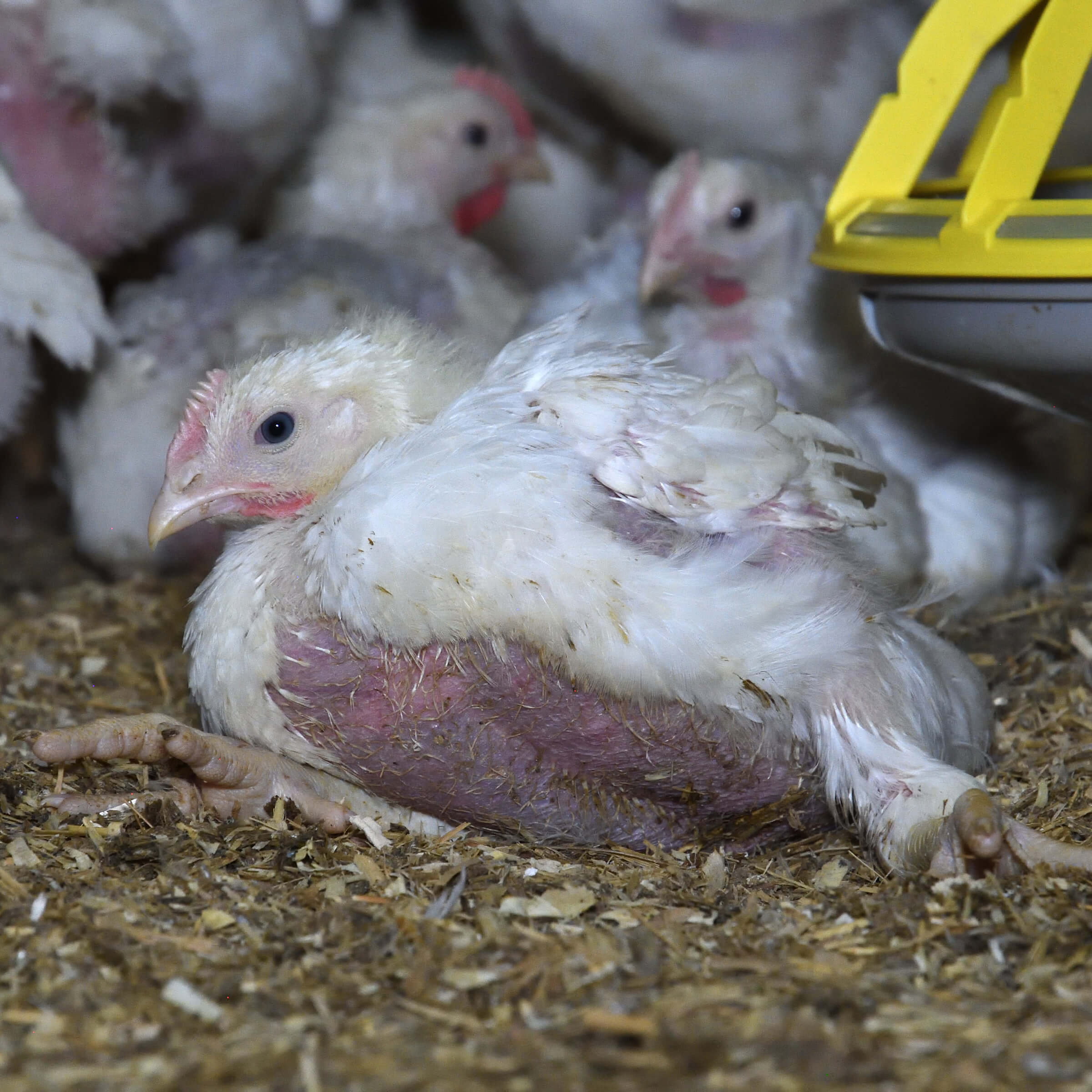 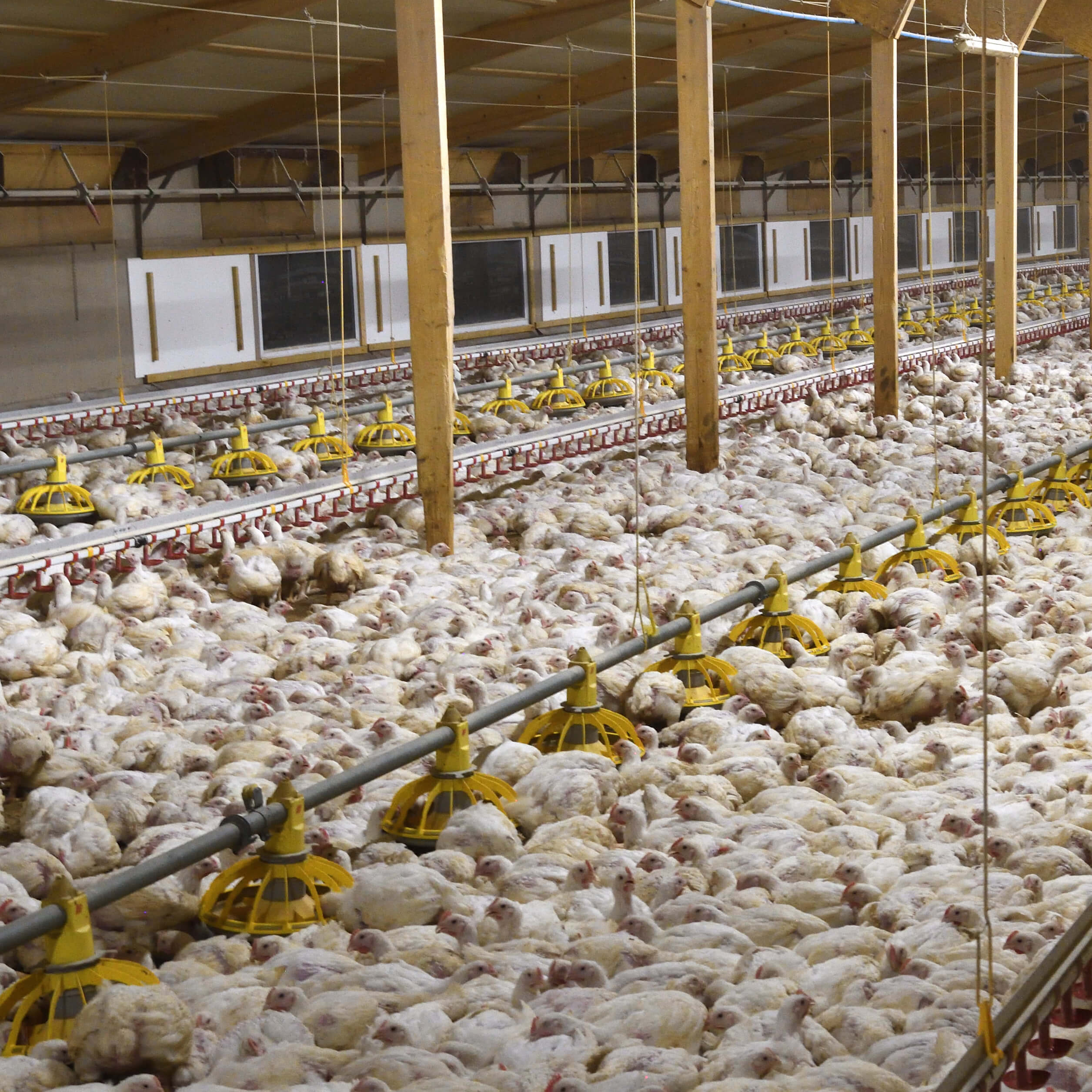 Tens of thousands of oversized chickens are crammed into each dark shed, leaving each bird with as little space as an A4 piece of paper. This lack of space is extremely psychologically stressful for these sensitive animals who, in the wild, would typically live in flocks of just 10 or 12 birds. As it is so painful for the chickens to stand and carry the burden of their heavy bodies, they spend most of their time laying on the damp waste-covered floor, leading to further health issues such as red, raw ammonia-burns on their breasts and feet.

In addition to the four farms covered on this page, Animal Equality carried out investigations into a further eight Moy Park farms in late 2019, the abhorrent findings of which recently featured in the Independent.

Not only were there further instances of baby chicks having their necks crushed, but water dispensers were routinely raised to heights that smaller birds were unable to reach. This was done with the heartless intention of killing birds that wouldn't grow as big as their flockmates, putting these poor beings through agony just to save a few pounds.

Responsible for raising and killing over 312 million birds each year, Moy Park is the source of nearly one-third of poultry products sold in the UK and is a known supplier of both Tesco and McDonald's.

The footage and images on this page were taken on farms operated by Moy Park - a known supplier of Tesco.