Animal Equality’s work on the dog and cat meat trade began in 2012 when our investigative team made contact with brave local activists in China to shed light on this cruel industry.

The trade and consumption of cat and dog meat is still allowed in several countries. Although most people in China do not eat the meat of these animals, it’s estimated that more than 10 million dogs and about 4 million cats are killed for human consumption every year. 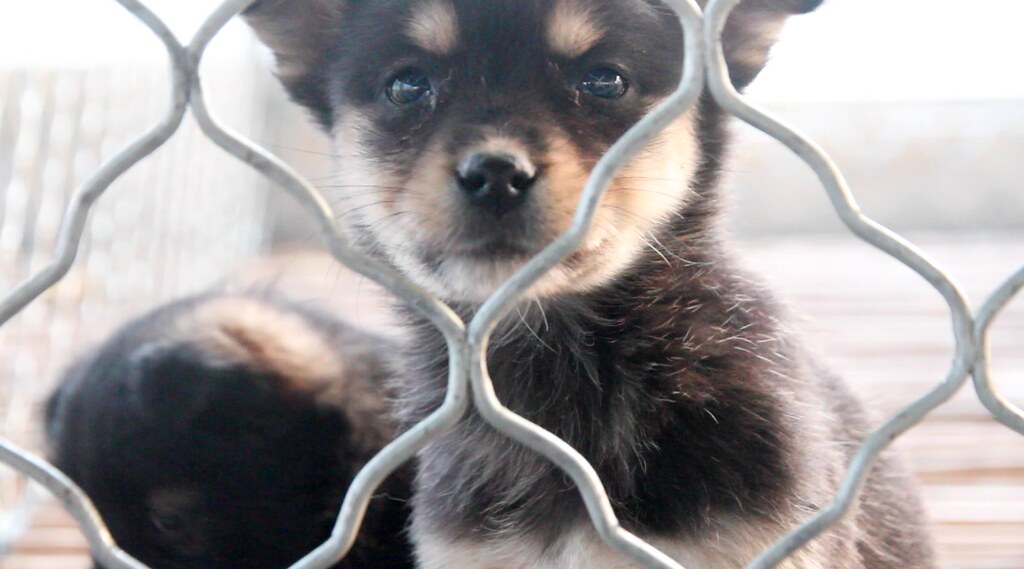 In some regions, dog and cat meat is sold at street markets and in restaurants. The cost of dog meat is around £3 per 500 grams, a price higher on average than the meat of other animals.

Our brave investigators carried out an extensive investigation of live animal markets that sell dogs and cats to the highest bidder and slaughter them on the spot. The dogs and cats come from illegal farms or are kidnapped from their families and imprisoned for days in deplorable conditions, without water or food. These sensitive animals are then killed in front of each other in the most brutal of ways.

* Some of our videos are considered ‘sensitive content’ by YouTube, which may mean you can’t view them on this page. If this is the case for you, click on the ‘Watch on Youtube’ link in the box above to view the video.

This first investigation was shortly followed by another one into a further two markets, two dog breeding farms and a dog slaughterhouse.

During the 2008 Olympic Games in Beijing, local authorities had urged the city’s restaurants not to sell cat and dog meat, which did lead to a dramatic decline in its consumption.

However, our investigators along with courageous local activists found that dog and cat meat continued to be served.

We managed to infiltrate a slaughterhouse in the region where some of the dog meat sold came from.

Some of the dog meat that is sold in these places comes from slaughterhouses in Shandong province.

With the help of an interpreter, the investigators spoke to Chinese farmers, gaining their trust .

They pretended to be interested in buying large quantities of dog meat , and the breeders showed their willingness, opening the doors of their breeding to us.

Many dogs in the kennel still had their collars on, proof that until recently they were in loving family homes and had been stolen.

Our investigators also saw puppies – just a few weeks old – crammed into tiny cages, waiting to be sold to another facility specialising in ‘fattening up’ these animals.

Our investigators risked their lives to collect these images, but it was worth it because, with their work, we achieved a historic result…

In October 2013, news came of a great victory that we will remember forever.

Thirty-three cat and dog meat retailers in one of the markets we had visited and a dog slaughterhouse were closed by the authorities following our investigation, which was conducted with brave local activists from the Guangzhou Volunteer Center and other animal protection organisations. 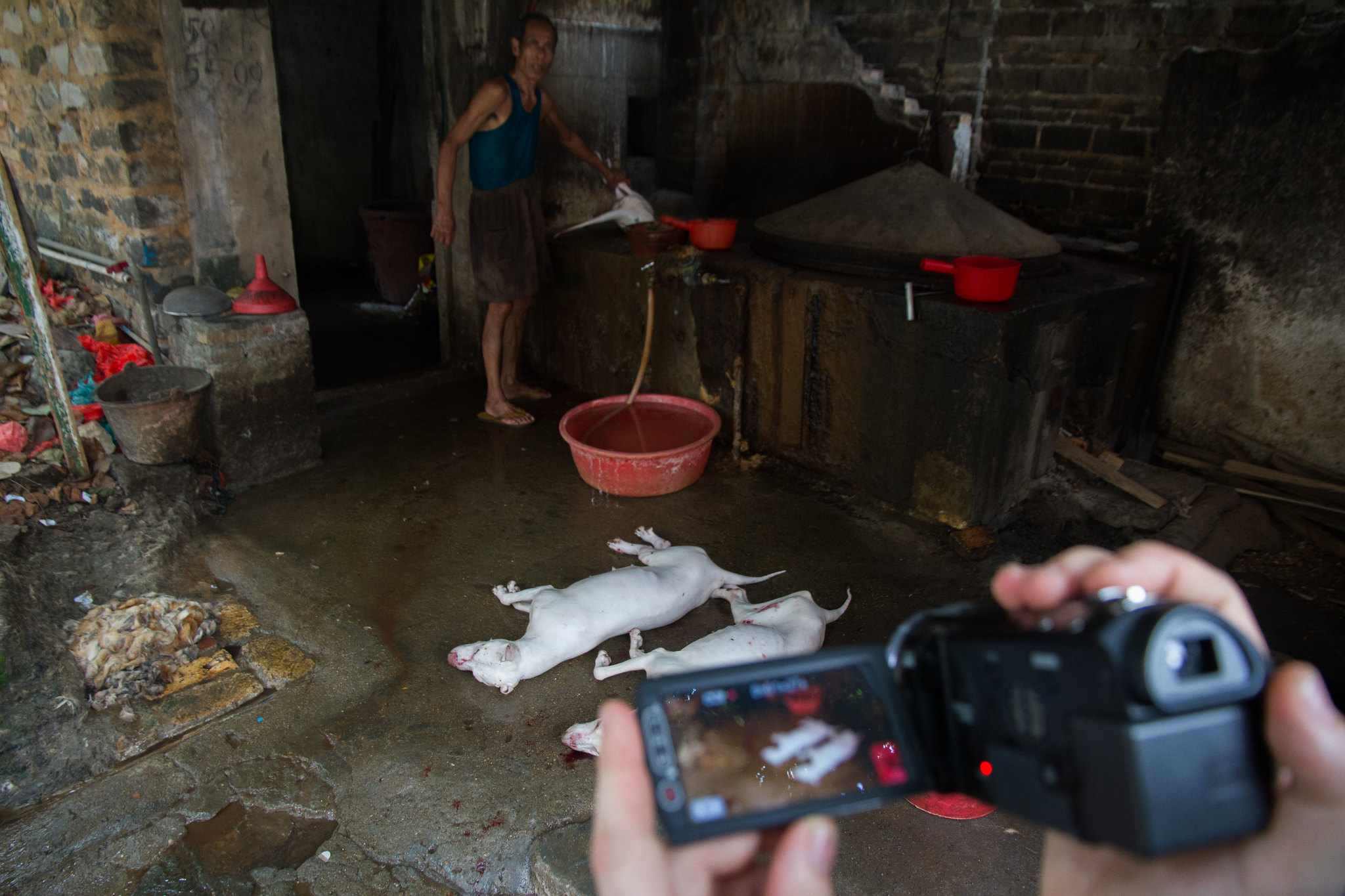 The footage obtained by our investigators was used by the authorities to denounce the illegal conditions that the animals were being kept in. We uncovered violations of biosecurity regulations, and a lack of vaccines and certificates of origin for the dogs (since most of the animals came from the street or were stolen from their families by traffickers).

During the raid, the police seized more than 600 dogs and cats in poor condition – all of which were taken in by local animal rescue groups. 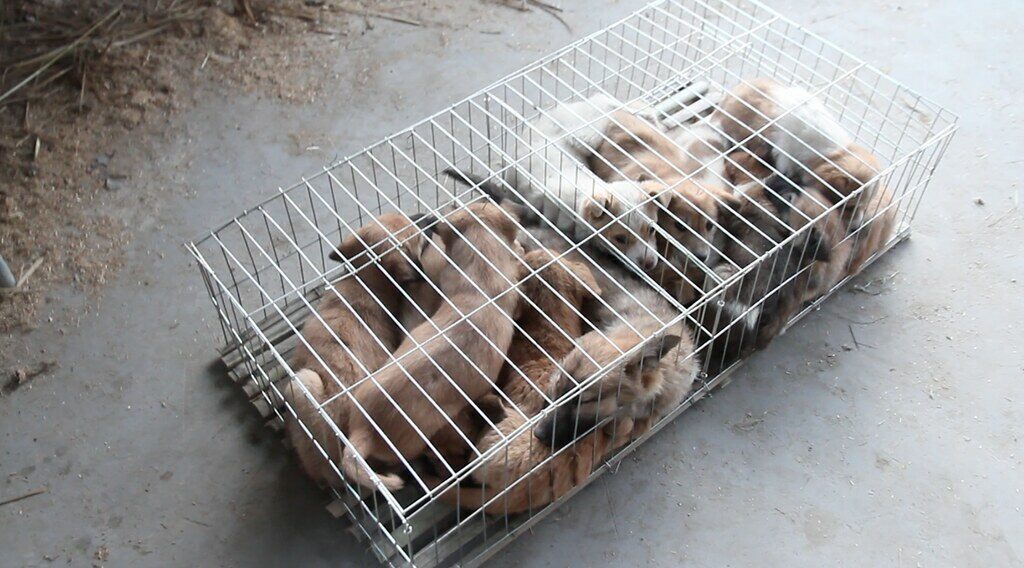 The authorities also closed a slaughterhouse located near the market that was used by traders to supply local restaurants. During the police intervention, more than 100 dogs were found in cages, many of them injured and dehydrated, while others were tragically already dead.

Footage of the closure of these cat and dog retailers and slaughterhouse was broadcast around the world, reaching the homes of millions of people.

DOGS AND CATS SKINNED TO BECOME BAGS, TOYS, AND CLOTHING

Dogs and cats used for their fur are stunned with violent blows to the head, after which their throats are cut. Many regain consciousness only to bleed to death, agonising for many minutes. 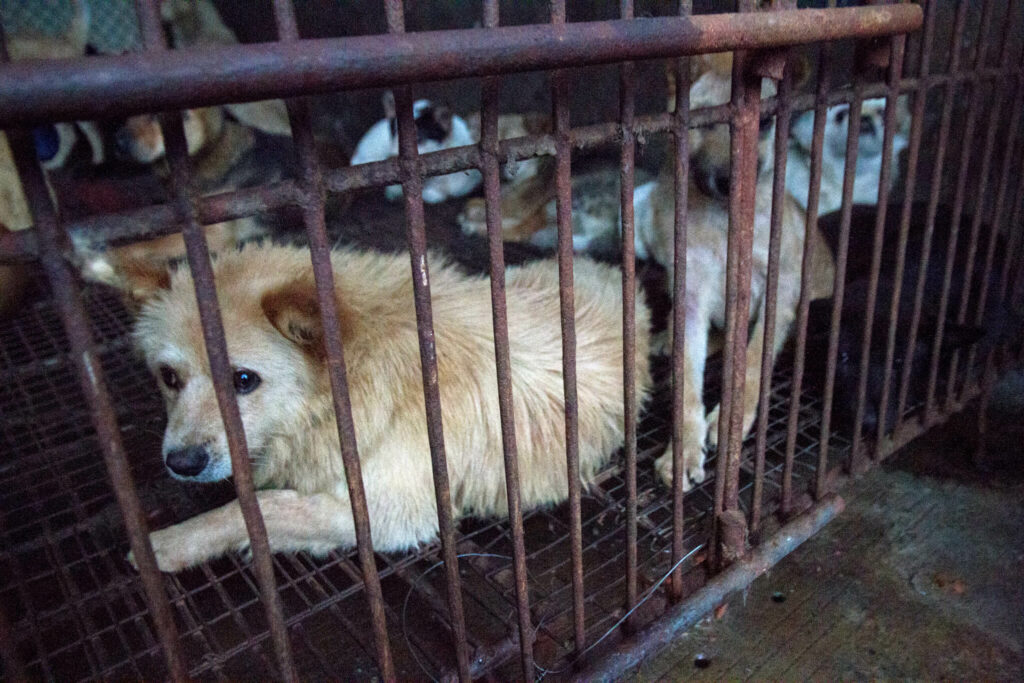 In addition to the animals’ flesh being sold as meat, their fur and skin are used to produce bags, clothing, and even toys.

In one market, shopkeepers sold carpets made from cat and dog fur. In another store, our investigators found children’s clothing and toys in the shape of cats and dogs, all made from their fur.

These products are often falsely labelled as ‘rabbit fur’ – an industry that is also rife with animal suffering – so they can easily cross international borders and be sold in stores around the world.

THE TRADE OF DOG AND CAT MEAT IN 2020: NEW FOOTAGE

In response to the spread of COVID-19 and the controversy over live animal markets, the Chinese Government removed dogs from the list of animals considered ‘livestock’, but the trade and consumption of cat and dog meat have still not been explicitly banned.

For this reason, our investigators returned to China in the spring of 2020 to collect new footage documenting that the trade of these animals is still ongoing.