Between January and May 2016, two Animal Equality investigators filmed inside three typical but randomly chosen pig farms in England. They uncovered shocking conditions at each, including one owned by the British Pig Executive (BPEX) Chair who recently received a Queen’s honour for her work.
31/05/2016 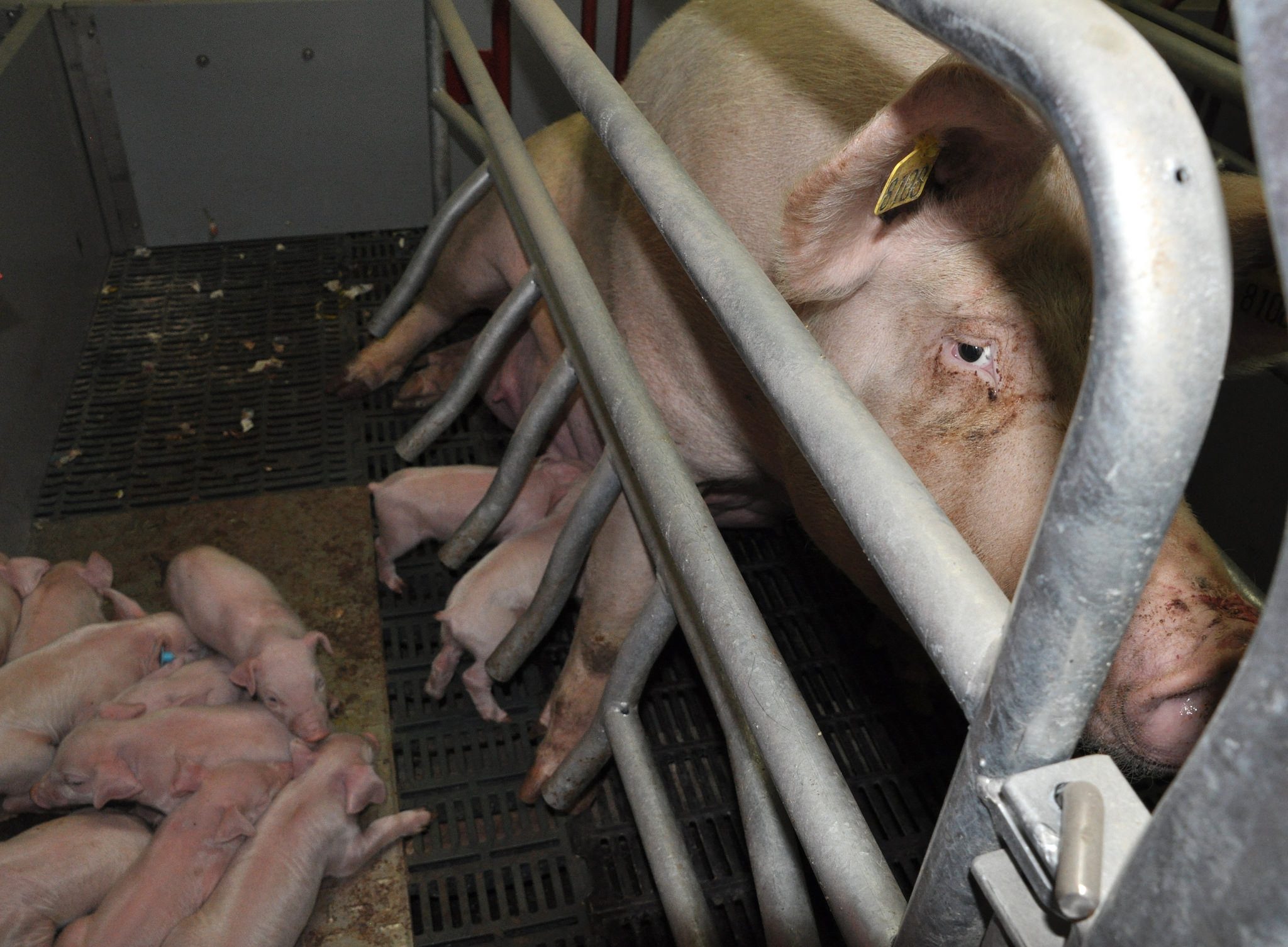 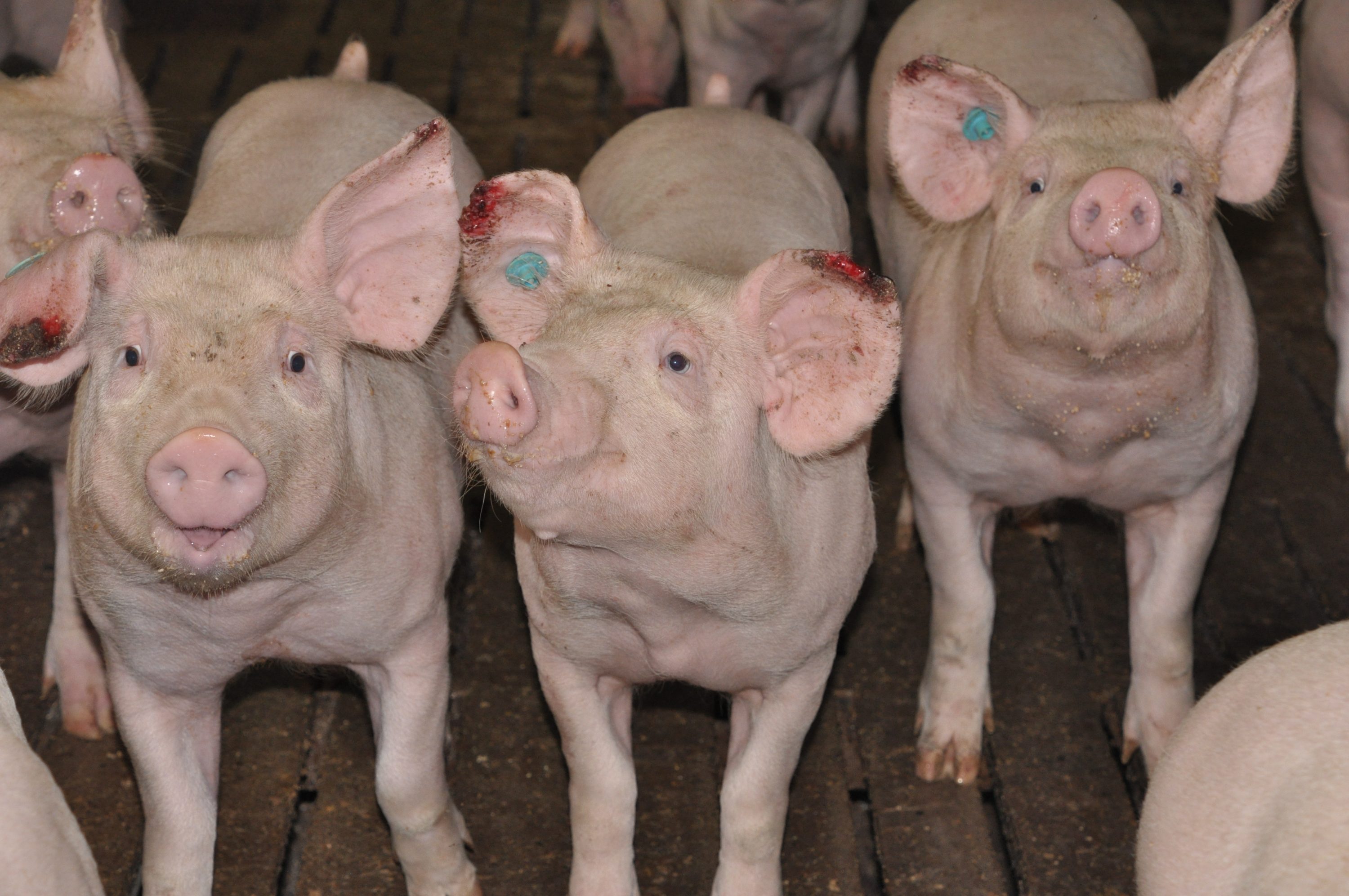 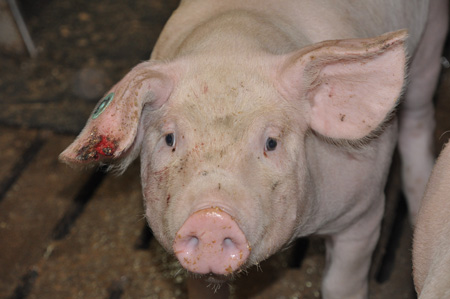 The British public is constantly being told that our pig farms have high welfare standards. But this new investigation reveals that award-winning farms force pigs to live in squalid, barren conditions and lock mothers in cages that prevent them nurturing their piglets – who often die right beside them. If these farms with their awards, MBEs and lucrative supermarket contracts are the best the industry can manage, just imagine how bad conditions are on “average” farms.’

At Sand House Farm, Lincolnshire, owned and operated by BPEX Chair and industry leader Meryl Ward who was awarded an MBE in 2013 for ‘improvement to pig welfare’, pigs are forced to live knee-deep in slurry. 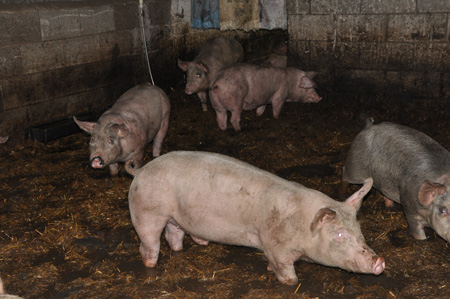 During two visits to this farm (in January and May) our two investigators also filmed sows with large sores on their flanks and hocks; multiple dead and dying piglets; a pig with a rectal prolapse which was being bitten by other pigs; pigs confined in barren, concrete pens; and routine tail docking with amputated tails left littering the aisle. This company supplies Co-op and Sainsbury’s. 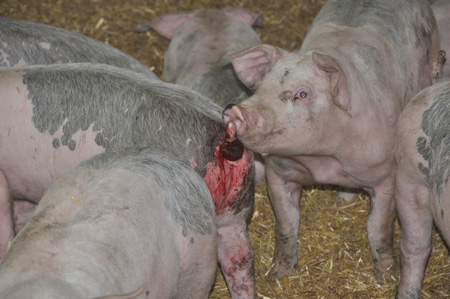 At a second farm (Crockway Farm, Dorset) owned by the award-winning company JMW Farms which supplies Tesco and Asda (confirmed 2013), our two investigators filmed sows locked in tiny individual stalls, a practice banned in the UK in 1999. This company was named NSF Assured Pig Farmer of the Year 2015 and was included in the London Stock Exchange’s ‘1000 Companies to Inspire Britain’ report in 2016. 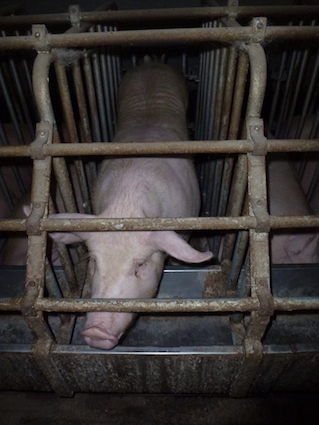 During two visits to Crockway Farm in February our investigators also found pigs confined in barren pens with profound ear wounds caused by bored pen mates; a dead pig being cannibalised by pen mates; sows with large sores on their flanks and snouts; and multiple dead and dying piglets. 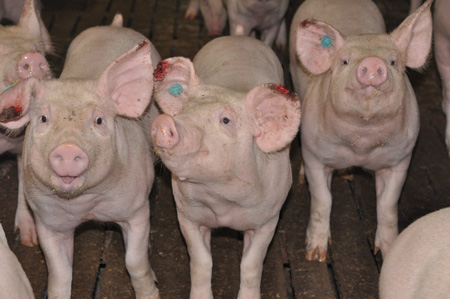 On a visit to a third farm (Bourne Farm, Dorset) in April, our two investigators found pigs in crowded, barren, filthy pens with floors caked in faeces and liquid feed, and a dead pig left in the aisle of a fattening unit overnight risking spread of disease. 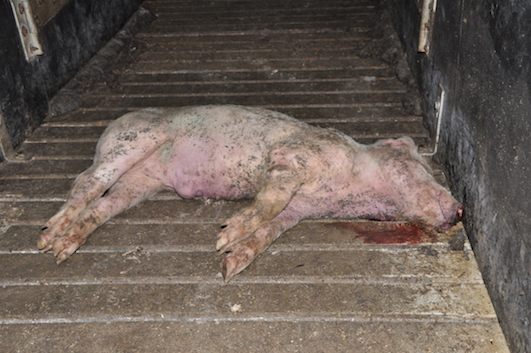 Pigs are highly intelligent and both EU and UK laws demand that they be given enrichment to prevent boredom and stress. This should be a manipulable material such as straw, hay or compost. The British regulations specifically say objects on chains are not recommended as they ‘quickly lose their novelty factor’. Yet most of the pigs we filmed had no enrichment whatsoever, while others simply had filthy objects on chains. 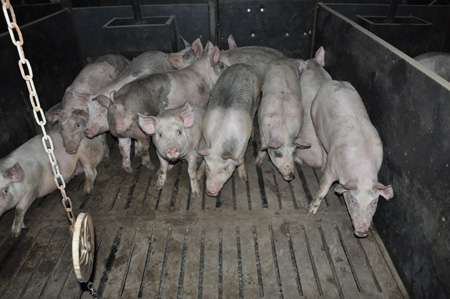 Given that bored pigs can harm each other – often by biting one another’s tails – providing enrichment is required. According to EU and UK law, tail docking – to prevent injury – should be a last resort when all other measures, including providing more enrichment and more space, have been tried. Despite the lack of suitable enrichment, all of the pigs we filmed on all three farms had been tail-docked. 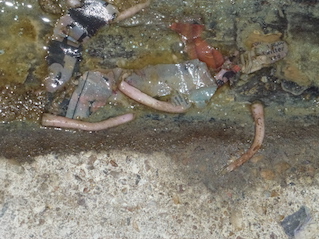 According to veterinary expert Andrew Knight, Professor of Animal Welfare and Ethics at the University of Winchester, who reviewed the footage from all three farms:

‘No reasonable person could fail to be appalled by the conditions endured by these highly intelligent, sensitive animals. Consumers would be shocked if they knew the truth about the conditions in which these pigs were raised.’ 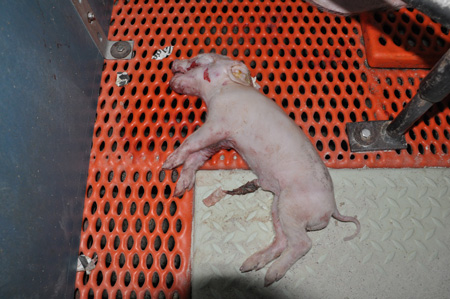 We have presented these findings to the government officials responsible for monitoring farms and asked them to ensure the meagre legal protection farmed animals have is enforced. We have also alerted the supermarkets who buy from these farms and asked them if they find these conditions acceptable.

But you have the real power to end this suffering by leaving meat off your plate. Check out the great selection of delicious plant-based foods and recipes at www.veganuary.com.