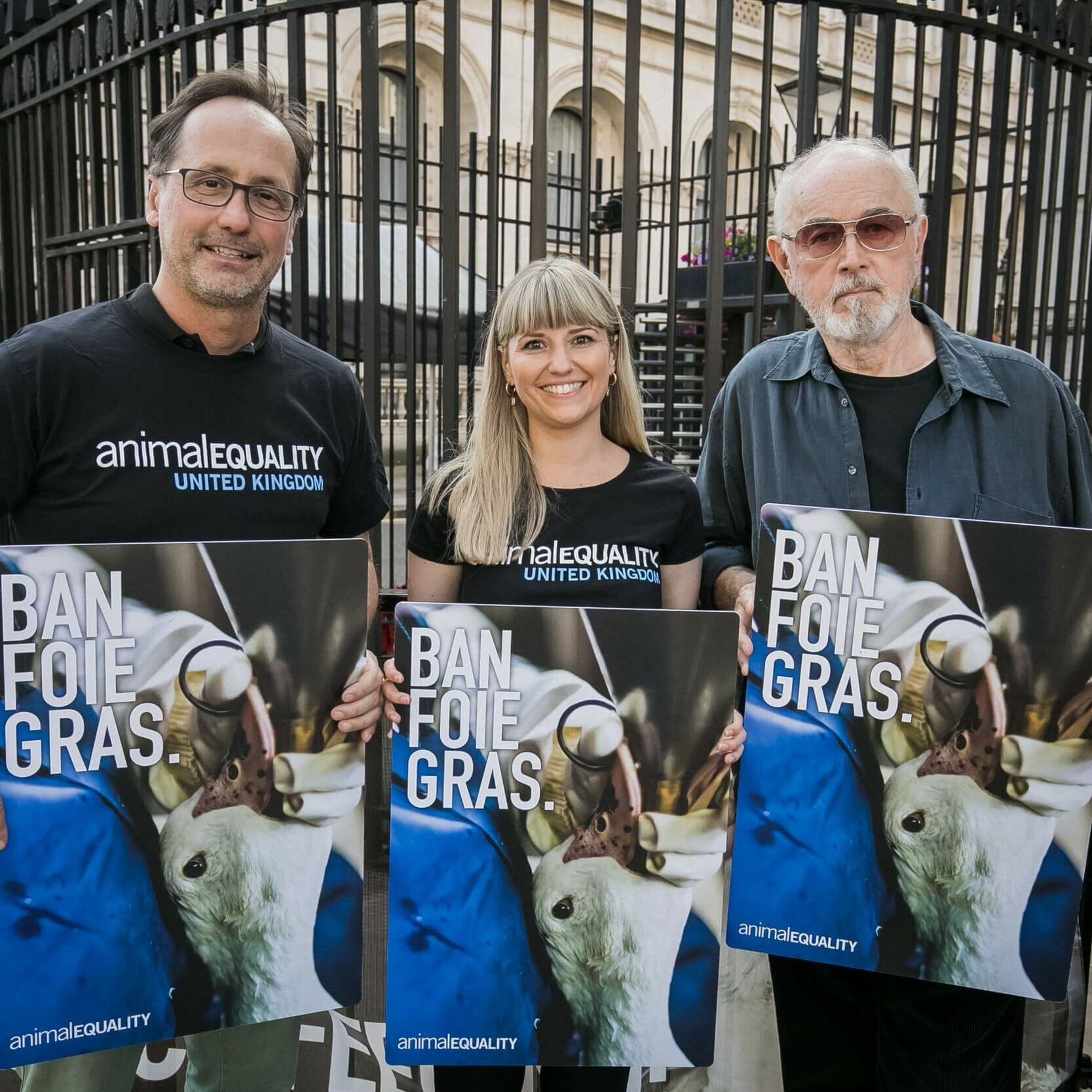 A Letter From Peter Egan to Animal Equality’s Supporters

On Tuesday 7th September, actor and animal advocate Peter Egan joined Animal Equality outside Downing Street to deliver over 225,000 signatures to the Government, demanding a ban of the importation of foie gras made by force-feeding.

Over the past years, Animal Equality has documented the suffering of ducks and geese on foie gras farms across France and Spain where birds are force-fed to produce engorged fatty livers.

This process is so cruel that it is illegal in the UK, yet nearly 200 tonnes of foie gras is still imported into the UK every year.

Since it launched in 2017, Animal Equality’s campaign to ban the importation of foie gras made by force-feeding has gained widespread public support, reaching a staggering 225,000 signatures.

Peter Egan – British actor and animal advocate – has been supporting Animal Equality’s call for a foie gras ban since we first commenced our campaign. In 2018, he ventured inside a foie gras farm in France with us, where he witnessed first-hand the appalling cruelty that this so-called ‘delicacy’ causes to millions of ducks and geese every year.

I recall looking at the geese inside the farm that day […]. As soon as the worker emerged through the door, they started panicking, turning frantically to the back of their cages and trying desperately to escape. They clearly knew what was about to happen to them.

One year later, he joined Animal Equality’s team and supporters in delivering 100,000 petition signatures to 10 Downing Street, urging the Government to ban the importation of foie gras once and for all.

We continued relentlessly campaigning and gathering public support. And earlier this month, together with Peter Egan, we returned to Downing Street stronger than ever before, delivering 225,000 names to Number 10 Downing Street, calling for a ban on the sales and importation of this extremely cruel product.

It would be a huge accomplishment if we can finally convince the Government to ban foie gras from our country. I will certainly feel a sense of relief knowing that hundreds of thousands of ducks and geese will be spared from the cruelty I witnessed.

Over the years that he has backed our campaign, Peter Egan has been overwhelmed by the enormous support and perseverance that Animal Equality supporters have shown. So he decided to personally thank them by sending them this email.

I don’t think we’ve spoken before, so let me introduce myself. My name’s Peter Egan and I’m a British film and television actor. If you’ve seen my face before, there’s a good chance it’s because you’ve seen me playing the role of Hugh “Shrimpie” MacClare in Downton Abbey or as Paul in the television series, After Life. The reason I’m writing to you today, however, is not to talk about my day job, but rather my other great passion: helping animals.

It is a cause that I care deeply about and to which I have dedicated a significant part of my life.

I was there to hand in a petition containing over 225,000 signatures to the Government, showing the strength of public support for a foie gras ban to be implemented immediately. Among those hundreds of thousands of signatures was your signature. Thank you for lending your support to this important campaign.

I have been supporting Abi, Jenny and the rest of the Animal Equality team on this campaign since they launched their petition back in 2017 and I’ve been with them every step of the way.

The fact that we could be so close to a ban now after all these years of hard work is very uplifting. Not least because I myself have seen the cruelty first-hand.

As you’ll know, producing foie gras involves force-feeding ducks and geese until their livers swell up to ten times their natural size. It is a truly barbaric act.

In 2018, I accompanied Animal Equality to document what was happening on a foie gras farm in France. In all my years as an activist, it was one of the hardest things I have ever done.

In foie gras farms, ducks and geese are confined inside metal cages so that when they are force-fed multiple times a day, they cannot escape.

I recall looking at the geese inside the farm that day, and at first, they looked quite calm in their cages, perhaps resigned and hopeless about being stuck there.

But then the worker entered the room and everything changed.

As soon as the worker emerged through the door, the geese started panicking, turning frantically to the back of their cages and trying desperately to escape. There was no way they could get out but still, they tried. They clearly knew what was about to happen to them.

What followed was one of the most disturbing things I have ever seen with my own two eyes. The process of force-feeding animals is disgusting. It should be banned at once.

It would be a huge accomplishment if we can finally convince the Government to ban foie gras from our country. I will certainly feel a sense of relief knowing that hundreds of thousands of ducks and geese will be spared from the cruelty I witnessed.

While we focus on the campaign in front of us now, and quite rightly too, I would like to draw your attention to something I realised on the foie gras farm that day.

Going into that foie gras farm gave me an insight, if only brief, into the lives of the brave activists who venture into factory farms and slaughterhouses to uncover all manner of animal abuses.

I’m talking about the investigators who see the kinds of things I saw and feel the kind of pain I felt watching helplessly as those animals suffered, and yet make the difficult decision to go back again day after day to do more.

The images Animal Equality’s investigators have captured inside foie gras farms in France and Spain have been a vital part of our campaign. Without them, the Government would surely not be considering a foie gras ban today.

It’s the hard evidence of investigative footage that forces the Government and other decision-makers to face up to the consequences of their inaction. We can campaign all we want, but without the evidence the investigators collect, we would persuade no one.

Investigators are the true heroes and we must do everything we can to support them and their vital work.

If we manage to secure a foie gras ban soon, and I sincerely hope we do, the truth is it will not be the end of our work. Just as the investigators leave the farm one day and return the next, we must come back once more, even more determined, to spare the animals who will remain in factory farms across the country.

That is how long term change is achieved.

No doubt they are out there at this very moment, collecting the evidence that will inspire tomorrow’s change. They deserve our support.

Join Peter Egan in urging the Government to ban foie gras made by force-feeding.