One Law for Companion animals, Another Law for Farmed Animals – A Case for the Vegan Option Continued

15/08/2012
OPINION: Most companion animals in most countries are protected by laws that oblige their 'owners' to protect them from pain, suffering and injury. And these 'owners' must give them a suitable environment so they can 'exhibit' their natural behaviour. 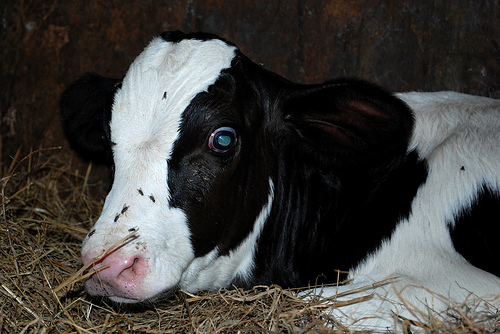 But most companion animal 'owners' do not need a law to advise them how to look after the animals in their care. They know the animals need freedom to play and explore; a diet that suits their digestive systems; and a comfortable place to rest and feel safe. They know they have feelings – that they experience joy, happiness, excitement; even concern, anxiety, misery.

These animals are part of the family; loved and cherished – not just dogs and cats but any animal that has been brought into the domestic environment. People who keep hens, pigs, sheep, goats or rabbits describe their personalities, their individual traits, their likes and dislikes. They know what the animals enjoy and they do not want to let them down. They empathise with them when they are hurt, sick or frightened. Veterinary bills are willingly paid. This is a relationship built on trust.

But the situation is very different when it comes to animals raised for food. Aficionados of meat passionately defend their choice and seem not to mind that they perpetuate cruelty – with the law on their side. For no country has animal welfare laws that protect farmed animals the way companion animals are protected. They do little more than make it an offense to cause "unnecessary suffering".

When animals are crammed together in their thousands, in their fear and frustration they turn on each other. Although it might be unlawful to mutilate – to beak trim, teeth grind or tail dock – exceptions are permitted on welfare grounds or, in other words, if not doing so would cause greater suffering. So to reduce the likelihood of injury from 'cannibalism' these kinds of 'mutilations' (both are industry terms) become crucial. No country has a law that makes anaesthetic a legal requirement for these procedures as long as the animals are very young. (It would, in any case, be an impossibility when numbers are so great). But find a puppy in distress from having had its tail docked and an animal welfare society will rush to administer analgesics and do everything possible to bring the perpetrator to court.

So great are the paradoxes and incongruities between the laws for companion animals and the laws for farm animals that they live in parallel universes. While pets recline on comfortable beds, are fed gourmet meals, amused with toys and pampered with grooming products, farmed animals are bedded on wire or slats or on litter saturated with their own excrement. They live in fear, pain and abject misery. Their lives, in effect, are perpetual torture. Legally sanctioned.

Companion animal 'owners' can be prosecuted for allowing an animal in their care to become overweight (there is even a weight-loss drug for dogs). Meanwhile animals raised on an industrial scale – crippled and malformed by their alien fast-fattening diets – are plagued with obesity-related diseases. They suffer from fatty liver and kidney syndrome; from rickets and abnormal bone and muscle development; they are racked with leg weaknesses, lameness and joint diseases. Unnaturally rapid growth causes hearts to become enlarged and lungs congested; fluid builds up in the abdomen and the strain often results in heart failure (called 'sudden death syndrome' in the industry). Afflicted with infirmities, infections and disorders their lives are inherently unhealthy and diseased. If you treated a companion animal this way you would be prosecuted.

Yet when we buy the produce of factory farms we help perpetuate such suffering – and not just meat eaters. 70% of calves born to dairy cows are raised for meat – making the dairy, beef and veal industries one and the same: in this way buying milk, cheese, butter and yoghurt supports the meat industry. And buying supermarket eggs supports an industry too large to care about the hens, where the discarded male chicks are thrown alive into mincing machines.

Only hands-on farmers have a relationship with their animals that is similar to the bond that companion animal 'owners' have with the animals in their care – and treat them with compassion. But the overwhelming majority of the UK's farmed animals are raised on an industrial scale. They are kept in an environment that is totally alien to their needs, shut up in sheds and treated with unmeasurable cruelty. Is there an assumption that farm animals feel differently from the way companion animals feel? Do we imagine they do not feel pain, misery and are terrified when they cannot escape from other animals that attack them or the humans that round them up for slaughter?

This double standard – one law for companion animals, another for farmed animals – invites the question; do we have any moral obligation to the animals we use for food?